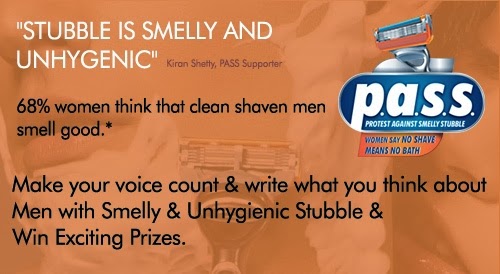 P.A.S.S on Blogadda is very helpful in recollecting all my memories related to beard and mustache. This happened about eight and half years back when my family went to see a boy for my sister number three.  By the way I have five sisters. So the boy and his family have already seen my sister's photograph and liked her,it was now our turn. I was not among those who went to see him but they came back to respond after discussion in home. They brought his photograph to show to my sister.

When we saw the photograph along with the sister concerned we rejected him because he was bit fat and kept beard and mustache. She said ," I hate that smelly stubble." But those who met with him told that he was a good guy. My father told our concern to them that he looked elder than my sister through the mediator. He said that he wanted to marry only her and asked to give him fifteen days before making any decision.

After fifteen days he was thinner than before with a clean shaven face thus was looking younger also. My sister was married to him in 2005,they are now leaving happily in Delhi with two sons and a daughter.

This post is a part of the Protest Against Smelly Stubble Activity in association with BlogAdda.