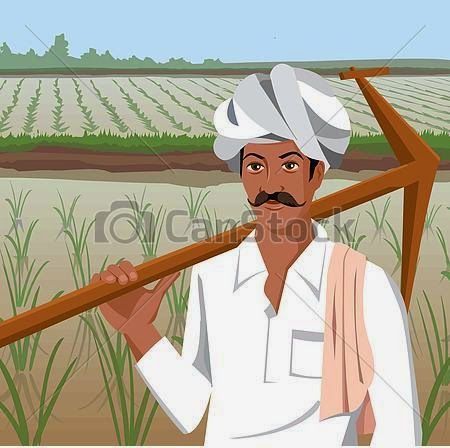 Mere desh ki dharti sona ugle but the farmers responsible for this feat is unable to buy sona (gold) for himself due to their poor condition. Some are so helpless to get even food for their family. How ironical that one who fed crores himself sleep hungry. Indian economy is mostly dependent on its agricultural yield although there are the numerous effort to increase agricultural production since independence by introducing high yielding seeds, fertilizers, insecticides and pesticides, etc but no efforts work done for the betterment of farmers and they were only used as vote bank.

Farmers don't get reasonable prices for their product, there are no storage facilities for keeping crops after cutting, irrigation facilities are not proper and most of the farmers depend on rain for that purpose, though there are provisions of compensation for crop damage due to untimely rain,drought or other such factors, the amount given to them was based on the directions laid down in 1967. The grants made through this formula is mere a formality for crop damage. It don't even give them their investment. The recent rains in northern India have compelled some debt ridden farmers to commit suicide.

The land acquisition bill made by Britishers in 1886 was making farmers landless for years until it was changed in 2013 by UPA government. This law allows governments to acquire any property with prior notice and the compensation issues was never settled amicably. Farmers saw some hope after changes came in 2013 but the new Modi government have made amendments in it making it easier for government and private stake holders to grab farmers land without giving them their proper due.

There are no social media campaigns for such issues perhaps because we care more for what we are eating than for thinking whose efforts are helping us to eat this. Why building new roads, industries, etc labelled as development and not easing life of farmers by giving them more facilities and a good life. It is no matter how develop we become we would anyhow require food to eat. So we must raise farmers issues so that they can live a happy and prosperous life. Lal Bahadur Shastri the second prime minister of India rightly coined the slogan Jai Jawan Jai Kisan as these two are backbone for a country to prosperous but today there is no heed to their need a problem which should be our priority.

Here is the video of this song Mere Desh Ki Dharti Sona Ugle from the movie Upkar (1967) to remind you of some happy farmers, hope to see some Acche Din for them also :