The Amazing Racist is a novel based in Sri Lanka and is written by Chhimi Tenduf-La. Chimmi Tenduf-La is half English,half Tibetan who grew up in Hong Kong,London,Delhi and Colombo,where he now lives with his wife Samantha and daughter Tara. This is his first novel. I have received this book which is published by Hachette India as being part of the BlogAdda Book Review Program. It is a story of a sweet and sour relationship between a son-in-law and father-in-law. 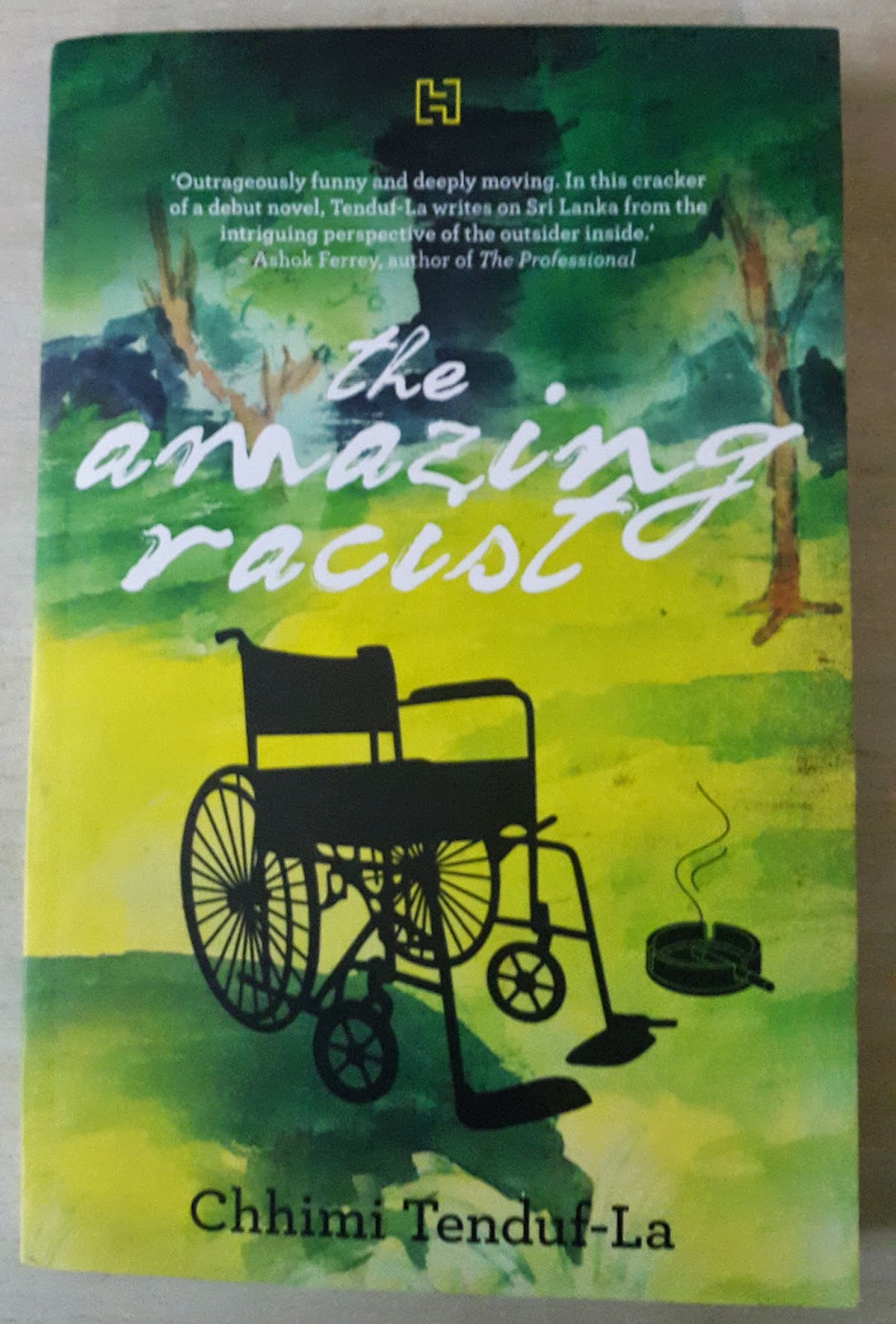 Cover : Cover is in the colors of Sri Lanka -green representing their greenery. A wheelchair on its cover and a cigarette in ashtray make no sense when you haven't read the book but after reading you know how much sensible the cover is. It not only arises curiosity in the reader but make reader wonder what relation it has with the title of the book.

Plot : Edward Trusted an Englishmen came to Sri Lanka from England as a teacher in a school. He fell in love with Menaka Rupasinghe  a vibrant carefree modern Sri Lankan beauty who was daughter of Tilak Rupasinghe a hard, orthodox, disciplined man who was suffering from cancer. He wanted to marry her daughter with someone from their race,religion and caste and thus tried every possible way to separate them but Menaka and Edward were adamant about their marriage. They married and after a year Kiki their daughter was born. Menaka went to work for an NGO in North Sri Lanka after the end of civil war in that part of the country and distances herself from Edward and their daughter. Edward then took care of their daughter with the help of Tilak who hated him for his color. How they will come together for Kiki? How will their relationship change with time? Will Menaka return in her family for her daughter? Will Tilak survive cancer? The book answer these questions and culminates into an emotional ending after some comedy,love and drama between father-in-law and son-in-law which make them discover how much similar and different they are from each other.

Highs : The climax is the high point of the story. The emotional ending was written superbly and with full of emotions. Explanation of Sri Lanka's culture from a foreigners perspective was also done nicely. The comic situations arises from Tilak's behavior add flavors to the narrative. The narrative is fast paced and interesting. The story has many similarities with Indian mindset and thus looks as their own to the Indian readers.

Lows : The writing style and language is difficult to understand and confusing at places. Although the setup for the story is new and fresh but the story is old and I have seen similar situations in many Hindi movies. There are no twists and turns in the story which makes it predictable.

Verdict : A fresh take on old story. But you will love the comic scenes and friendly tussles between Edward and Tilak. A fun read all the way which would strengthen your believe that love has the same language everywhere in the world.