Curse of The Red Soil is written by Durgesh Shastri who is a Computer Networks Engineer, currently working as an Asst. Professor in GNDEC, Bidar, Karnataka which is also the place where all actions are happening in this book. I have received this book being the winner at Blog-A-Ton for my post It Was Just A Dream. This book is published by Red Ink Publishers and belongs to the thriller genre. 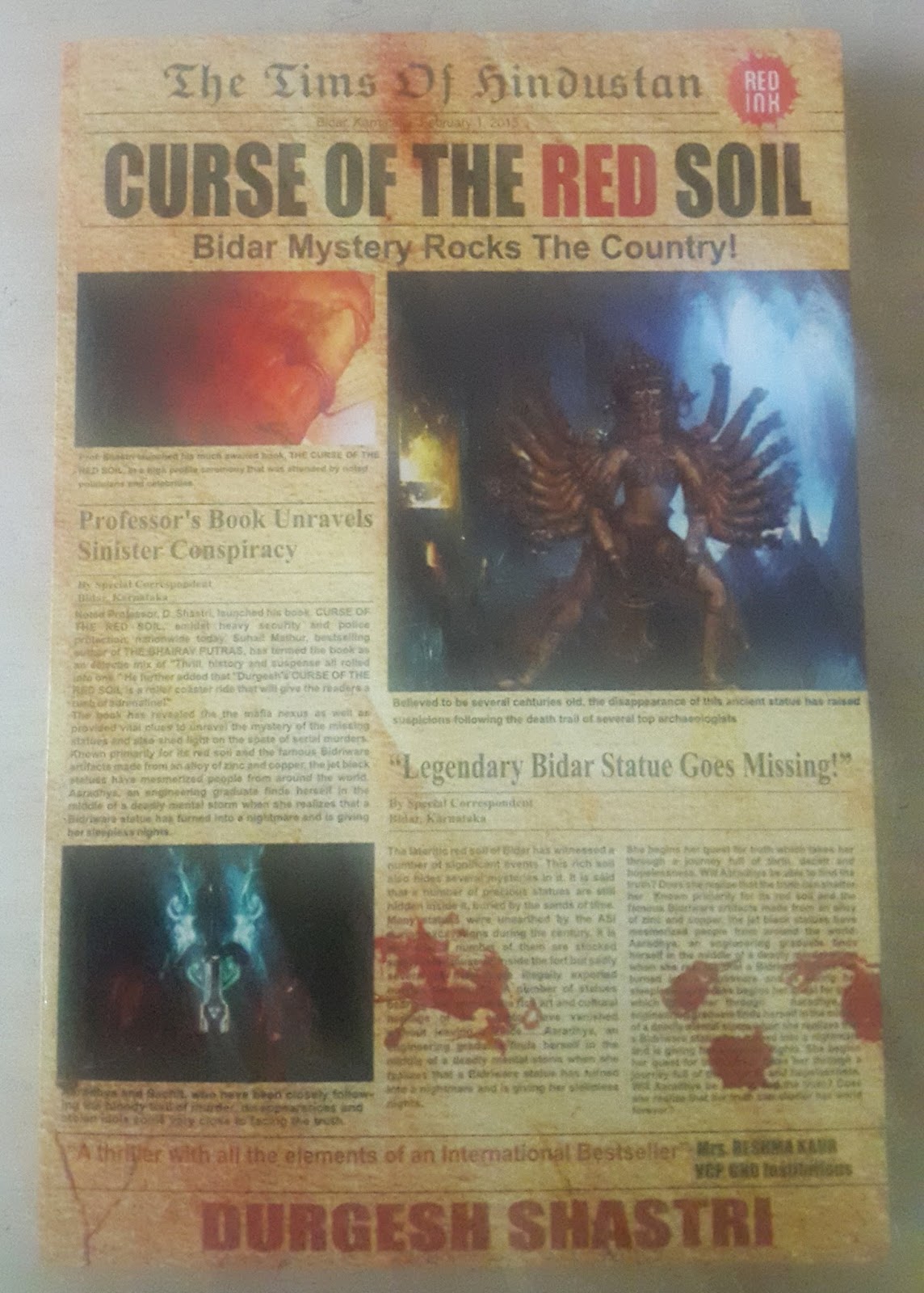 Cover : Cover shows a newspaper page with the book title as headline and a story about missing Bidar Statue with image of that statue. I will not rate it as a brilliant sort of cover as it fails to ignite the curiosity about the story inside but yes it mystifies the things inside.

Plot : Aradhyaa and Suhasini returns to their hometown Bidar in Karnataka after completing their engineering in Bangalore. Before the end of the last year in college Aradhaya has also confessed her love for Sachit who thus accompanied her to the railway station with his best friend Ritesh when she was going to Bidar. Aradhaya was disturbed with a dream about her maid Manorama whom she hasn't seen in last four years. In order to inquire about her she visits her family where she knew about her father's linkup with Manorama,  Pratap, Manorama's brother also believed that her father Vaikunth Patil has killed her and stopped them to registered any case with use of her power. Sachit and Ritesh also came to Bidar to investigate his fathers involvement in all this. This investigation not only strengthen love bond between Sachit and Aradhaya but also brought Ritesh and Sachit to Jail. Aradhaya's love, her trust on her father whom he also find involved in smuggling of antics from Bidar fort, her friendship, her past all is at stake in this express ride.

Thriller : I like the way author has used flashbacks, the description of previous scenes in thoughts of the character have maintained thrill and excitement in the narrative. Detail information about Bidar's history, geography, archaeological sites, etc creates involvement of reader in the narrative. You keep guessing what's coming next which is a good thing for this genre. Although the book is a thriller , romantic scenes are also narrated appropriately. Simple language adds a cherry to the cake.

Spoiler : I don't have much complains about this book except the end. The revelations in the end is a surprise element which is fine but the climax before that lacks emotional value looking at the relationships of the character involved in that scene. That could be done differently and could be much better.

Verdict : A fast paced thriller with emotional backing and a fantastic narration is a must read for everyone.