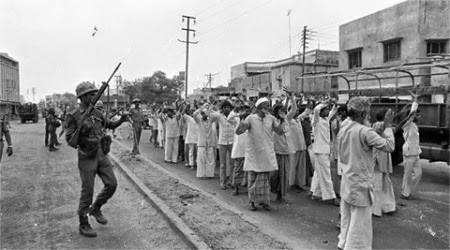 If there are killings, there must be a killer or killers but this fact for time and again have proved wrong in the lights of Indian Judiciary and recently it happened again with the judgement of 1987 Hashimpur massacre case in which all 16 accused were released for the want of evidence.

On May 22, 1987, members of the Provincial Armed Constabulary (PAC) rounded up about 50 Muslim men from Hashimpura, a settlement in Meerut and allegedly shot at least 42 of them in one night, before dumping the bodies in nearby canals. 5 people survived by pretending their death or with minor injuries. If PAC took these men away in a van than who else can kill them and dump them in canal and if not them then who? Several governments have changed in centre and in the state but all helped in the cover up of the incident.

Crime Branch Central Investigation Department (CBCID) appointed by state government only helped in destroying the crucial evidences. The case has been postponed and delayed unnecessarily in UP state for about 15 years before it transferred in Delhi Tis Hazari court where after a long trial no one proved guilty. The worst part is that 10 of the accused police officials still holds important positions in UP police without any mention of this incident in their Annual Confidential Report (ACR) as revealed by an RTI by victims.

Collegedunia.com is providing information about Best B.Ed colleges in India , I wish for a similar website which provides the detail of relief and compensation given to victims of riots,massacres and police brutality because they have received very meager compensations that to in installments and those who survived with injuries are yet to receive anything.

I have few questions , if they were not killed by PAC than who killed them? Why investigative agency failed in arresting the criminals? Why their is no record of movement of entry and exit of that PAC van? Where is the record of bullets used by these PAC members since it is mandatory to keep records? I hope soon in the near future I will get these answers and the victims will receive justice. There is no compensation which can heal the wounds of lose of a loved one but they could help in living a respectable life in future. Politicians are just playing blame games and people of this country now only raise their voices for trending hash tag topics. There must be quick decisions on the issues like re-investigation of the case, compensation to victims, etc and in the end I can just say God bless India.
Annual Confidential Report(ACR) CBCID current affairs Hashimpura massacre News Provincial Armed Constabulary(PAC) riots Tiz Hazari