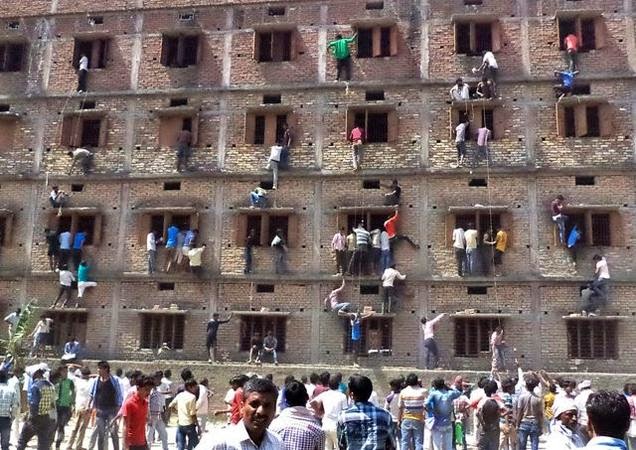 Khullam Khulla Cheat Karenge means that we will cheat openly and the situation which brought these lines on my lips was the large scale open cheating in class X board exam in Vaishali Bihar.
The cheating took place in the presence of police officials and no body bother to stop them even when the video of people climbing the four-storey  Gyan Niketan examination center at Mahnar in Vaishali district.

Bihar HRD minister Prashant Kumar Shahi said it was beyond the state government to curb or stop large scale cheating and that it was the duty of parents to teach their children such manners. Such a scenario is depressing for those students in Bihar and other parts of the country who spend sleepless nights in preparations of their exams just to secure good marks. The students who are copying from chits and books are definite to bring good marks from those who learn and reproduce the lessons depending on their retention power and are more likely to commit mistakes.

Whether Top Bsc Colleges in India or the Best Commerce Colleges in India they all would prefer students with higher percentage due to their high cut offs and then those who cheat would move forward corrupting the system further with this type of mindset to their side.The cheating incident is also a shame on our education system which give so much importance to marks thus to pressurize students to retort to illegal means to secure good marks in the range of 90 to 100. The spider man act by friends and relatives of students is one such example, these people ( standing outside to give chits) were also putting their life in danger during this act because of the chances of falling down but I think they have mastered that art of climbing, looking at how conveniently they are climbing walls and taking leaps from one window to the other.

This is a serious issue and need strict actions and I hope Nitish Kumar's government would also dealt it as a thing necessary for Susashan (good governance) until nothing of that sort happens khullam khula again in the country, Good Bye and Good Day.
Bihar board exams Gyan Niketan India Series Nitish Kumar Sponsored Reviews Sushasan Vaishali