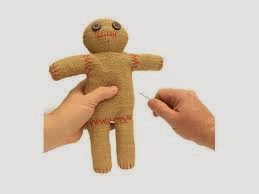 Our group decided to watch India-Pakistan T20 match together at one of our friends house. But it was a working day, it was impossible to get a leave in March as there was financial year ending work load. It was also difficult to miss that match. It's the India - Pakistan clash and not any ordinary match. We were five friends in that group including Rohan whose presence at match viewing place was in doubt from the very first day we made this plan as the quota of his yearly allotted vacations was over. He gave us assurance for his arrival but we didn't have any hope of his coming.

I didn't face any problem being self-employed but all others came with the help of excuses.We were ready to watch match with switched off phones,Pepsi and many eatables when door bell rang. We were surprised to see Rohan and watched the match together after which he told his superb excuse. Since his boss was superstitious he made a doll with old clothes and Cotton similar to voodoo dolls used in black magic. He wrote his name behind it and showed it to his boss who got frightened for him. He told his boss that he found that doll in the lift and doubted that someone in office was doing such a heinous act. He pretended that he was feeling headache from the time he saw that doll. His boss gave him an address of a voodoo expert he usually consulted in the matter of magic along with the leave for that day. He did visit that expert so that his boss didn't got suspicion, he gave him a thread to wear.

It was genius on his part to think like that but we enjoyed his presence for his special comments during the match. He jumped with each boundary and wickets taken by his favorite teams which on that occasion was India. One if not glued to TV could watch a full match on his face which changes color and expression with each ball telling you exactly what was happening. Before starsports.com app he was the one doing all these works. Like Action Recap feature of this app he too could give you quick and complete recap of the match as if you were always there during the match. Action recap came handy for matches parts of which was missed due to office hours that's why I liked this feature the most.