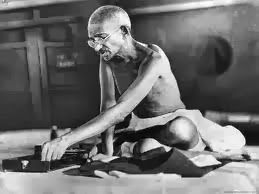 Mohandas Karamchand Gandhi or Mahatma Gandhi was a face synonymous with Indian Independence struggle. The direction of the independence movement was changed as soon as he entered in Indian arena from South Africa where he fought for the rights of non white people. His efforts unified whole Indian Independence Movement under single leadership of Congress party working in his guidance.

At one point during his period of emergence everyone in the country was certain for freedom but that is also the point where his helplessness first appeared. He called off non- cooperation movement after Chauri-Chaura incident where protesters retort to violence after police action. The man who send Indian soldiers to help British army in World War 1 suspended the almost successful movement on the ground of violence that too after police atrocities. Gandhi's failure to secure commutation of Bhagat Singh, Rajguru and Sukhdev's execution also revealed his helplessness. Suspension of civil disobedience movement after Gandhi-Irwin pact,no strong action against partition,communal violence intensified and he never strongly opposed communal forces by starting a movement for it. All these incidents proved his helplessness in many occasions.

Indian Independence was the result of  not only of Gandhian movement but it was the part of changing world scenario after world war 2 and the formation of United Nations. The decrease in power of British Empire resulted in many independent nation during that period and India was also one of them. The freedom which was our right was granted to us as an act of kindness that too at the cost of partition which sow the seed of everlasting conflict in the country. The nation formed on his ideas is thus weak and helpless. After independence we succumbed to our neighbors China and Pakistan by giving them parts of our land. People easily accepts everything as part of their destiny without raising any voice,we stop working and sat on protests on very petite issues which in turn hinders with growth of nation.

World celebrates International Day of Non-violence on his birthday i.e 2nd October and his philosophy of truth and ahimsa(non-violence) is admired throughout the world,many world leaders like Nalson Mandela,Khan Abdul Gaffar Khan,etc followed his ideals in their respective struggles. But this is also the fact that the helplessness we inherited from him is responsible for corruption,poverty and hunger.