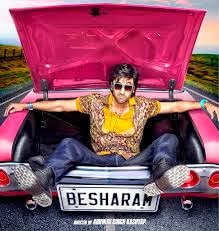 Ranbir Kapoor's much awaited film Besharam was released on 2nd October in about 3600 screens in India. It was his second release this year after Yeh Jawani Hai Diwani which was a box office hit with earnings around 188 crores and hence expectations with this one is also high.

The film stars Pallavi Sharda opposite him,along with his parents Rishi Kapoor,Nitu Kapoor sharing screen space with him first time and Javed Jaffery in lead roles and is directed by Abhinav Kashyap who made his directorial debut with Salman Khan starrer Dabangg in 2010.

1.Plot : Film is about a car mechanic cum car thief Babli who with his partner Titu steals car and feeds an orphanage in which he was also brought up. He falls for a girl Tara at first sight and tries to woo her with his besharami(shamelessness). He started improving in her love but she keeps herself away from him.One day he mistakenly stole her car and feels bad about it. In his determination to bring back her car he put himself  in trouble with the bad guy Bheem Singh for whom he works. Inspector Chulbul Pandey and constable Bulbul Pandey gets involved in this situation and helps Babli in his fight with Bheem Singh. A rowdy turning into a good guy for a girl is age-old Bollywood masala film formula which needs a different approach if presented again. This approach is there but director is not clear in his approach as film fails to establish balance between action,comedy,romance and drama.

2. Promotions : It is marketed in almost every big Indian television show along with News channels and print media. The buzz around for the film is great and it scores good marks for it.

3.Music :    Music for the film is composed by Lalit Pandit who also composed "Munni Badnam Hui" for Abhinav Kashyap's Dabangg. Lyrics are penned by Rajeev Barnwaal,Nikhat Khan and Himanshu Kishan Mehra. Except one or two songs,no other song make much impact and you tend to forget them as soon as film ends. Here this movie looses much point for the fact that music is heart of Indian films, people watch a bad movie even if music is good similarly bad music keep away the audience from the movie.

3.Casting and Direction: Ranbir can be better with character,there is not much for him to show his acting skills . Rishi and Neetu has done a worst performance of their lifetime with some cheap dialogues given to them. Pallavi has limited work to do in the movie and she is average in her role. Javed Jaffery don't fit in this negative character who is neither a serious nor a comic in performance. Direction is not up to the mark,some scenes are unnecessary and he looses his grip from the plot as film progresses.

Ranbir's fan may like the movie but it is difficult for it to break any records. It may gain as there is no big movie releasing this week. In my opinion film is below average and gets only two stars from my side.