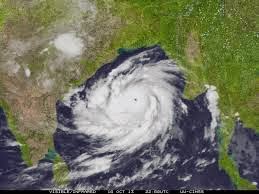 Cyclone Phailin is a tropical cyclone formed in Gulf Of Thailand in October 2013. It developed and eye and became half the size of India as it reached the Indian Ocean. It affected the coastal areas of Thailand,Myanmar and India including Andaman and Nicobar Islands. It was predicted by Indian Meteorological Department that this cyclone was much bigger and intense than cyclone Katrina which hit United States Of America in the year 2005 and thus devastation caused by it would be much higher.

But first time in the history of India,state government agencies along with NDMA (National Disaster Management Authority) were prepared after IMD's (Indian Meteorological Department) warning. IMD's predictions were also proved true which in itself is a big achievement because most of its prediction about weather made by them went wrong.The reason behind that is Japan Meteorological Agency was also monitoring this tropical depression, anyways this is another point of discussion but the fact which I like to highlight is the alertness shown by Indian agencies in handling the situation is worth mentioning.

Odisha was also affected by cyclone in the year 1999 in which many lives were lost and property worth millions were destroyed. After this cyclone many changes were made in the way of working of the agencies in spreading warning to remote areas the result of which is that about 550,000 people were evacuated and moved up from the coastlines of Odisha and Andhra Pradesh to safer places in time. The efforts were admired by world over. It also proved that if government wish than it is possible to complete the task in time and with full efficiency. Odisha and Andhra Pradesh governments responded well to the situation and really deserve a grand salute.

People may not have lost their lives but their homes,their occupations have destroyed by this cyclone which will take a while to restore.We should pray for their well being and speedy recovery from this disaster.