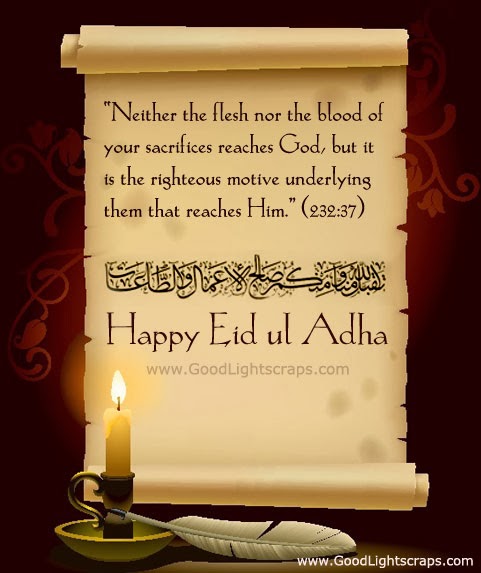 Eid ul Adha or Feast of Sacrifice is celebrated by Muslims all around the world as an act of submission to Allah. It honours the willingness of prophet Abraham to sacrifice his son Ismail on Allah's command and his son's acceptance to being sacrificed,before Allah intervened to provide Abraham with a lamb to sacrifice instead.

It shows the Abraham's and Ismail's devotion and belief in Allah that whatever HE does is always for the good.Well to do Muslims all over the world sacrifice an animal like goat,buffalo,sheep,camel,cow and chicken and distribute one third of it among neighbours and friends,giving another one third to poor and needy people This ritual is also performed during Hajj pilgrimage.

This festival signifies to sacrifice one's pride,greed,pleasure,etc and to distribute love and food among poor and needy. By sacrificing an animal and sharing its meat with others one develops the habit of sharing happiness with others,as the blood flows out from the animals body in the same way bad habits should come out of one's body. It also reminds that man is mortal and hence check his deeds to have a better fate in the world and in after life.