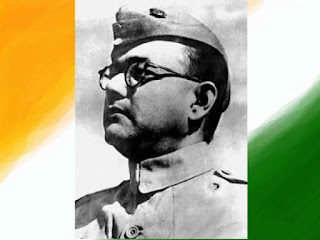 Subhash Chandra Bose is known in minds of common Indian as a freedom fighter who formed Azad Hind Fauj (Independent Indian Army) to fight Britishers during Indian independence struggle. He was opposed to Mahatma Gandhi's soft approach towards India's independence and wanted complete independence with the help of armed struggle. His quote ' Tum Mujhe Khoon Do, Mein Tumhe Azaadi Dunga' (You Give Me Your Blood, I Will Give You Independence) is also famous in the masses thanks to a commercial of Kaun Banega Crorepati in one of its season. But what is discussed the most among the people about him was his mysterious death.


He died of third degree burns on 18 August 1945 in a Japanese hospital after his overloaded plain crashed while going from Singapore to Thailand. Even after accounts of doctors and hospital staff who treated him before his death many believed that Subhash Chandra Bose escaped that crash unhurt and lived in Calcutta for many years after his death. I remembered when I first learned about this theory during my childhood in 90's I wished and prayed for his return for the betterment of the country. I thought he should govern India, who would oppose a leader of such reputation? But he never returned and remain a mystery for all of us. I don't know how and when this theory come in public domain but I am unable to understand why he hid himself from the people of India if he was alive after the crash.

I couldn't digest that a fearless leader was hiding because he was afraid for his life from someone in India. Some people say that he lived in disguise somewhere in Calcutta but I am not convinced because I couldn't figure out a reason for this behavior. Are they saying that he was an escapist? If Jawaharlal Nehru was aware of his existence then why no one else knew about it? Why he remain in hiding from his own family? Was he indulged in some anti-national activities? If he was not killed in plane crash and murdered by the government of India after spying on him, where are the proofs of it?

I am happy that Narender Modi is ready to declassify files related to him from January 23, 2016 the day of his birth anniversary after meeting his family and relatives. This would definitely burst some myths about his death. This would also clear doubts about the integrity of our first prime minister. This conspiracy has given some people a way to demean our national leaders, they would get answers to their queries after declassification of these files and a slap on their faces if nothing to their liking come out of it.
Azad Hind Fauj Calcutta conspiracy theory declassification Fresh Views Japan Netaji Subhash Chandra Bose Pandit Jawaharlal Nehru