35 and Sexless in Ahmedabad is written by Robin David and is published by Harper Collins India. I have received this book as part of Book Review program from Reader's Cosmos. It's a darkly comic story about a lonely man's quest for real connections. A mature subject suitable for adults only. 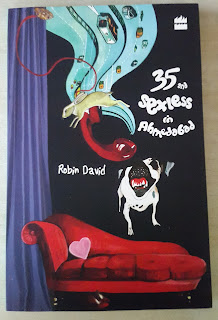 Cover: Cover depicts Anant's (protagonist of this story) nightmare a three leg dog and some other parts of his dream which is in sync with the story. Heart, girl's footwear and empty red couch justifiable to the title of the book.

Plot: Anant a photographer by profession lived alone in an apartment of Ahmedabad, Gujarat. He left his father's home to become a photographer like Diana Arbus (American photographer) after an argument with him regarding his photography and remained disconnected from him for over a decade. He started experiencing nightmares of a three legged dog resulting in distraction from work leading to disturbed life. He tried to contact a psychiatrist to know reasons behind such nightmares but eventually found all answers from self realizations. The story gives you interesting anecdotes of Anant's life, his loneliness and his sex craving.

Highs:  Its interesting how author easily switches between real and imagination of Anant's mind. The references to Diana Arbus, and other photographers and their style of photography to draw similarities or differences between situation's in Anant's life is commendable. The language of book is simple and narrative is in flow with the pace of the story.

Lows: The story ends where it starts it doesn't move forward from Anant's compartment i.e the book is static. There are instances where one feel for some twist in the tell but sadly it falls flat with no high points in the story. Sexual references at some places in the narrative are irrelevant.

Verdict: Anyone interested in knowing a lonely man's sexual desires should read it. Those interested in photography would learn a lot about it from this book.