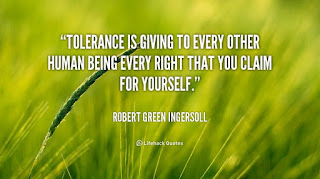 When and where this India thrived so fast? Who dissolved so much hatred in our veins? Who made these negative voices so strong? Who is nurturing this intolerance, this incapability of taking failure gracefully? The answer to this entire question is tolerance of those who remain silence about such intolerance give way to hate crimes. A large population doesn’t feel about such issues, they don't raise their voices against them. They can share a status about a lost dog a 1000 times but not a single like for a status on death of humanity. Why winning is always necessary for us? Why we always want to prove ourselves right? We have stopped telling our kids that failure is part of life that failure is a step towards success. We must give space for other’s ideas, must listen patiently to other's views.

The communal tension or hate crimes or incidence of intolerance are increasing on national level because our topmost leader, the head of the nation, our Prime Minister is silent on such a crucial issue. He makes mockery of those who talk about secularism at world stages giving more power to anti-national elements in the nation. He who has a say on every issue and an eye on every corner remain unaffected by these crimes. It’s ironical that he otherwise endorses communal tension as an obstacle in the way of development and a poison spoiling a generation of our youth power.

Sometimes Bardasht Karna Bhi Achcha Hota Hai (It's good to tolerate.) Perhaps wait in reacting on someone's action make his/her intention clear to us. Bardasht (Tolerance) saves relation and is needful in saving a nation. I have provided a YouTube video of the song here, though it is out of context to the topic but tolerate it as a nice foot tapping number.