The Last Nawab of Cricket

The Last Nawab of Cricket. 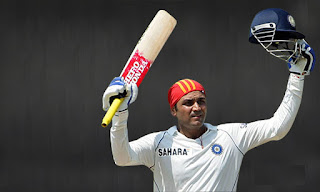 The Nawab of Najafgarh (a place in Delhi) Virender Sehwag announced his retirement from all forms of cricket breaking hearts of all his cricket fans. Like in his career he didn't have the respect he deserved even in his retirement. No special farewell match was planned by BCCI (Board of Cricket Control in India) for such a great cricketing mind. He was sidelined by the team administration suddenly and then was never selected for either test or one day internationals.

What Sanath Jayasuriya did for Sri Lanka, Sehwag did for India. He accelerated the much needed start after which no target seem impossible and no opposition seem invincible. He was brutal with all world class bowlers of his time. McGrath, Shoib Akhtar, Shane Warne, Shane Watson, Shaun Pollock, Wasim Akram, they all tasted his cruelty for the ball. When playing on the field he tried to hit every single ball for boundary whether he succeeded in it o not.

In a way he laid the foundation of super-fast cricket followed by Kohli, Raina and others. I will always remember him as a fearless disciplined cricketer who never feared his opponent nor feared his position in the team and just played his natural game throughout his cricketing career like a Nawab. He scored first test 300 hundred for India against Pakistan in Pakistan's Multan for which he often referred as 'Sultan of Multan' and he is still the only Indian batsman to score a 300. Only batsman in the history to have scored 7,500-plus runs in both Tests & ODIs as an opener.

He played like a Nawab without caring what his critics saying about his unconventional style of playing. He was a nawab because he played on his own terms never tried projecting himself to be a future captain or one who could control team and selectors. When he announced his retirement he kept intact his Nawabian style, no speculations, no controversial comments, no demands just a sudden announcement of ‘Alvida Cricket.’

He is now involved in training young cricketers and instilling in them ‘Viru’ like cricketing attitude but since time has changed and the cricket has changed, the attitude of cricketers have changed hence he became ‘The Last Nawab of Cricket.’