Murder On The Orient Express was written by Agatha Christie regarded as Queen of Crime. This book is published by Harper Collins. I was so unfortunate to not read her till now. Although I was aware of Agatha Christie and Hercule Poirot but this book recommended by +Anmol Rawat on Goodreads provided me chance to experience her writing. 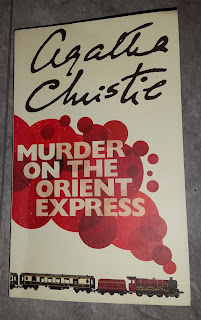 Cover : The placement of title on the smoke coming out from chimney of old steam fueled engine train is enough to create mystery right from the cover page itself. Moreover author Agatha Christie's name appearing bigger than the title was proof enough of her popularity.

Plot: Private detective Hercule Poirot cancels his stay at Tokatlian Hotel in Istanbul after reading a telegram calling him back to London immediately in relation to a case. He booked a seat in first class compartment of Orient Express and departs for London the same night. Mr Ratchett a millionaire believes that his life is in danger and asks for Poirot's help to which he deny for his busyness in other cases. The train is stopped by a snowdrift somewhere near Vincovi on the second night of journey and it was discovered that Mr Ratchett was killed brutally.

The next morning, Mr. Bouc, an acquaintance of Poirot and director of the company operating the Orient Express, informs him that Ratchett has been murdered and asks Poirot to investigate. He examines the body, interviewed all passengers travelling in that coach along with rail coach conductor, search passenger's luggage and so on. From his initial investigations he found that Mr Ratchett was actually Casette involved in a kidnapping and murder of a girl in America. This discovery lead Poirot to deduce that he was killed for that crime of his past. Who killed him? Was the killer still present in the train? Eventually all twelve passengers travelling in that coach comes under suspicion. How all passengers come out as suspects?  Hercule uncover each layer of the mystery to reveal the identity of the murderer.

Review : The book is unputdownable. I have finished reading it in just two days. The simple yet interesting investigation style of detective Poirot keep you hooked to the narration till the end. Even though story is set in Pre-World War 2 era it could be easily connectable to today's time. The characterization, language, pace of the plot, all give you correct material for an engrossing read. It is funny to find a fault in a book which has sold over a million copies but use of French words in the narrative without their meaning is hard to understand for a reader outside Europe.

Verdict: Go grab your copy immediately if you are fan of detective fictions and if you haven't touched that genre then read it to be in love with it. A wonderful example of pure detection without modern day techniques.