Deliverance of Sarpa Meru is written by Vadassery Thaiparambil Rakesh and is published by Partridge India. I have received this book from being part of the Book Review Program of Reader's Cosmos. The book claims to be a thriller set on the backdrop of modern,evolving energy wars and its repercussions on this side of the globe. 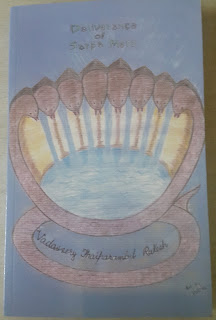 Cover : Although the art work by Mallika on the cover is good but for a book cover it is not attractive enough to seek reader's attention. It give a feel of snake monster as the villain or something which is not true for the book. The cover is unconnected to the story and if connected gives a wrong impression.

Plot: The plot is confusing and starts in a fantasy land. Sage Kshiprajyoti inhabited an island with his eleven disciples including a lady Tripu. They got control over their senses and started living naked on that island. When some disciples died , sage discovered an eight headed snake behind it whom he fought and turned into rock from which island got its name Sarp Meru. When Tripu became pregnant with a baby of a disciple of sage he left them to an unknown place. The story than describes inhabitant  of islands Nightingle, Woodpeckers, Ostriches, Adi Gauravs , arrivals of Strokes and Vultures with little story of Lily, Jasmine and Rose who opened a restaurant in island after their failed relationships. The story took a drastic turn in the end with Indian army's military attack to bring back peace in the island.

Thriller : I liked the part of military action in the book. The sexual drive and some scenes related to it are well penned in the narrative.

Spoiler : The story is confusing as I mentioned in the plot. Reader don't understand what is happening in the book. Communities are highlighted more than the characters. Sudden mention of India and other world countries in a book which otherwise looked as if set in an ancient world is a let down. The story makes no sense for me. The narrative is more about libido of communities than about the story. If writer has tried attempting something different, then he has failed in his efforts for me.

Verdict : I would not like to recommend it to anybody because I have only completed a full read of the book for my commitment to review it. A confusing story which is boring.