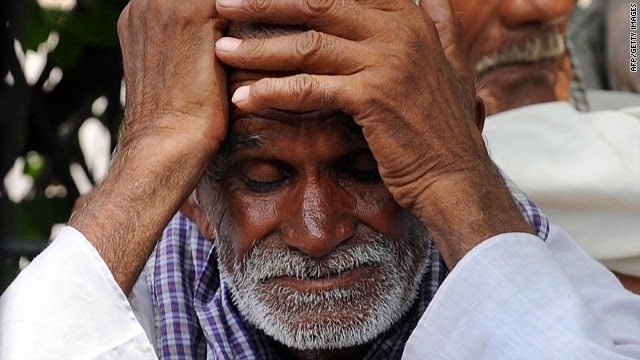 Ye Duniya Agar Mil Bhi Jaaye To Kya Hai is a famous song sung by Mohammad Rafi, written by Sahir Ludhianvi and music composed by S. D. Burman for Guru Dutt staring Pyasa (1957). These lines aptly describes the condition of the farmers who are currently dying almost everyday after the damage of their crops due to untimely rain and hailstorm. They are thinking what's the benefit if I get this world.

The debt ridden farmers have no hope from the world, governments and system to wait for any compensation thanks to their previous experiences resulting in their suicides. According to some media studies approximately 45 farmers are committing suicide daily in Vidarbha region (Maharashtra), Gujarat, Uttar Pradesh, Haryana, Punjab, Telangana and Madhya Pradesh. These are also the regions responsible for major agrarian product contributors to the GDP of India if condition there is so pathetic you can easily imagine the other areas with poor farmers. It is shameful that we are doing nothing for our 60% population dependent on agriculture.

The most horrifying thing about the whole crop damage and suicide problem of farmers is that neither the state governments nor the central government is serious for their sorry condition. Union Cabinet Minister Nitin Gadkari's remark that farmers shouldn't rely on god or government for help shows how serious government is about this issue. Even affected land area measurement by different government agencies are having different figures confusing the whole scenario.

What hurts more is the fact we city people who came out on roads for rape victims, corruption issue never lend their support to farmers who feed us by providing food. The bloggers who have a big impact on online news and information also avoid such issues. Twitter never trends with farmers plight. Let's hope that some relief should be send immediately to farmers without waiting for the evaluation of the damage and steps like loan waiver, help for new crop, etc should be taken to make them stand again on their feet. Yesterday was the Earth Day and no one but farmers are the most near to her. They are the true son of soil and I pray on this Earth Day for new ray of hope for farmers.