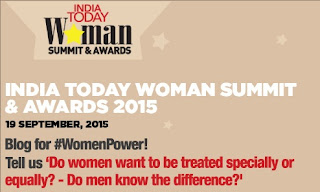 It is beyond doubt that a woman is powerful but it's sad that we have to say it again and again because many people in our country and world believes opposite of it. They treat women as inferior to them and didn't value their contribution in our lives and society. Women have achieved significantly in every field of life. She is the best homemaker, the best business woman, the best in field of cinema & art, the best in field of politics and so on. Yet she is not empowered and suffers badly in our society.

This distinction happens because we have made women special by creating God out of them instead of treating them as mere human. Now as god they have to maintain certain set of rules written in scriptures or orally imposed by traditions breaking of which is considered as an act below morality of a woman. The woman must adhere to these orthodox boundaries which were never drawn for men and the girl or woman who wants to come out of it is either labelled as a whore, a witch or a weed unwanted to the society for fear of ruining others.

I think women want to be treated equally than as a special being which have reduced them to a commodity. Treating someone specially means you don't consider them equal to yourself. Equality not only means equality in opportunity but equality in respect. I definitely believe that men is aware of this difference but don't want to breach it because they think that their power depends on suppression of women. That's the tragedy with power it comes at the cost of some one's rights. The patriarchal society snatches rights of women to establish superiority of men. Religion, custom, tradition and scriptures become their tool to affirm their right to rule over women.

Until this unending urge of power in men which is not only the cause of misery of women but also the reason behind some of the biggest problems in the world ends the equality of women remains a dream. The people who wants to make women powerful must do so without asking for privileges . Separate queues at ticket counters, less income tax rates, reservation at any level, etcetera have only made women puppets in men's hand. This is their way to show women as weaker sex and thus denying equality to them. Yes there is a need to uplift women but as their right and not as kindness towards them because the feeling of kindness make the one at the receiving end inferior to you. So, women which has power of life is much powerful than what we men can think about them.