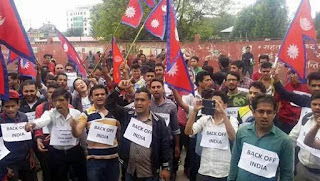 First #GoBackIndia during Nepal Earthquake and Now #BackOffIndia after promulgation of new constitution by Nepalese is a proof of diplomatic failure of Indian government in dealing with Nepal. The people of Nepal trended Back Off India hash tag on Twitter worldwide after Indian government try to intervene in their internal matter by taking note on seven points in their new constitution. Yogi Adityanath MP of ruling party BJP ( Bhartiya Janata Party) from Gorakhpur , Uttar Pradesh went one step ahead in dictating terms to them by sending a letter to Nepal constitution assembly suggesting to make Nepal a Hindu State than a Secular State.

We have a tradition of politeness in our Indian values but the present government which cared for culture and tradition so much that they have separate Cultural Ministry forgets that basic principle of our culture while dealing with our neighbors. They show a Big brother attitude to the smaller nations, the Akhand Bharat (Unified India) advertised by associates of the government challenges unique identities of these nations which is unacceptable to their people. Pakistan, Myanmar and now Nepal's mention to India to back off from their internal affair have maligned India's international image.

PM Narender Modi says that Indian felt ashamed of them before he was Prime Minister of India but we have never faced such humiliation in international arena for our government's action in the past. If the government have some suggestions and ideas for their new constitution or even if they have some objections to it they would send a diplomat to Nepal to deal with it secretly without creating media hype which have brought embarrassment to both the countries. It seems Nepal's move of adopting a secular state over Hindu state have spoiled ruling party's agenda to promote the same in India.

It is true that happenings in neighbor's house effect situation in our home but that doesn't mean we dictate them how to live or how to deal in a particular situation. When we are not comfortable with someone’s intervention in our internal matters then why we expect the opposite from others. I have said so many times that Modi government need to revisit their foreign policy in case of our neighboring countries to have better connections with them. Boosting what you have done for them on international stage is not a right move when we in India believe in the concept that even left hand shouldn't know about the help made through right hand. I hope for some better strategies from the government so that we not hear phrases like #BackOffIndia from any nation in the future.
BJP foreign policy Hindu State Narender Modi Nepal Constitution News Secular State Yogi Adityanath