Book Review : The Secrets of The Dark

Book Review : The Secrets of The Dark

The Secrets of The Dark written by Arka Chakrabarti is first part of the series The Saga of Agni. This book is published by Shrishti Publishers and Distributors and I have received this book as a part of Book Review program by The Reader's Cosmos. The series is a fantasy fiction about adventures of Agni. 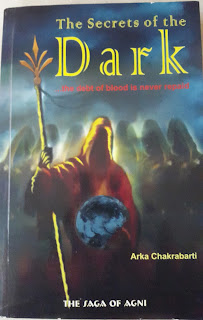 Cover : The cover justifies the title by depicting some dark figures signifying The Seven which were discussed in the book. It's an ordinary design and after reading the book I think this could be better if a picture of Agni surrounded by some shadows at the background of a burning ship would be there, anyways it is not a bad cover design.

Plot : There are two stories running simultaneously in the narrative which may connect in the next part:


Thriller : How story unfolds in a captivating narrative is the highlight of the book. Author has beautifully created a new world and have made it believable in a fantastic way. You started thinking that such a land really exists and all of them, Darshana, King Arkansas, Mahaguru Sidak, Agni, etc are real characters. The suspense is maintained till the end and it unfolded naturally in the climax without extra efforts. The book is part of a series but where it finishes it completes a chapter properly and reader not feels that it is incomplete.

Spoiler : Malini was killed without exploring romantic side of Agni which further detaches reader from Agni's pain of her loss. I think the story of Kingdom of Leu shouldn't be there but told in next chapters. Here in this chapter it stops the flow of narrative and make this book a lengthy read.

Verdict : If you love adventure, if you love thriller, if you love suspense, if you love fantasy or if you just love reading a good fiction than this book is for you. A thrilling tale of an unknown world which looks believable.

I have read the second part much before the first part. The Book Review of second part : The Rise of Grey Prince.

"This book review is a part of The Readers Cosmos Book Review Program and Blog Tours.  To get free books log on to thereaderscosmos.blogspot.com"
Agni Arka Chakrabarti Book Review fantasy fiction Reader's Cosmos Srishti Publishers and Distributors suspense The Saga of Agni