Phantom is an Indian action thriller film directed by Kabir Khan and produced by Sajid Nadiadwala and Siddharth Roy Kapur starring Saif Ali Khan and Katrina Kaif in leading roles. The film is a fictional and imaginative account of India's action after 26/11 Mumbai Attacks. 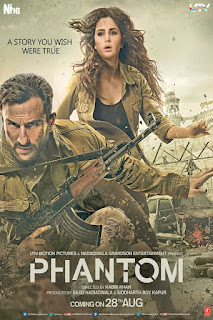 Marketing : The leading cast was present everywhere to promote this film be it reality shows, News channels or magazine and newspaper interviews. The public was aware of its release dates and there was a craze for it among the audience as Kabir Khan's previous release Bajrangi Bhaijaan is among the biggest earner of this year.

Music : The music album has six songs four of which are different versions the song Afghan Jalebi which is a foot tapping number. Saware in Arijit Singh's voice is also a good song. Unnecessary songs were not inserted in the narrative which was a good thing for the movie.

Story : R.A.W (Research and Analysis Wing) the secret service agency of Indian government plans a mission to execute all accused of 26/11 Mumbai attacks including Hafiz Saeed the mastermind of the attack residing in Pakistan. They select Daniyal Khan (Saif Ali Khan) an ex-Indian Army officer who was expelled from army for not acting according to orders which lead to death of his team members. He to regain his lost respect carry out the operation Phantom with help of Nawaz Mistry (Katrina Kaif) another R.A.W agent. Will they able to kill Hafiz Saeed in Pakistan? How they carry out the dangerous plan? Will they come back alive? A fast paced narrative answers all the questions.

Hits: This is the first time that Saif looks impressive in an action movie other than the Race series. The narrative is fast and simple which keeps the audience hooked to their seats. The action sequences are up to the mark and not exaggerated to show the protagonist as some super hero. The protagonist being a Muslim character rules out the possibilities of movie becoming an anti Muslim tale.

Miss : I missed the chemistry between Katrina Kaif and Saif Ali Khan. Though I was not expecting the love songs around trees but an emotional connect between the two should enhance the connect with the characters. The similar idea was previously used in D-Day which was based on bringing back Dawood Ibrahim back to India so the idea is not new. The climax could have been better than this.

Verdict : Must watch to experience a dream which is impossible in reality.