Operation India One is written by Shiv Kumar who works as Commercial Tax Officer for the government of Bihar. The book is published by Om Books International and I have received this signed copy from the author. The book is a journey into Naxalite affected area of Bhagatpur, Bihar. 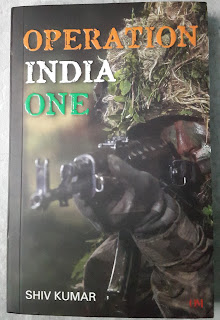 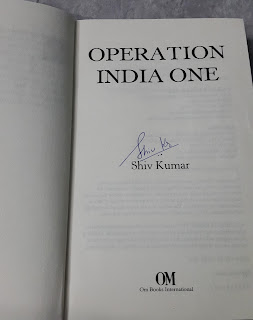 Cover : Impressive cover. Gives an idea about military action which matches the title related to Operation India One. It attracts and creates interest in the reader about the story which I think is the purpose of the book covers.

Plot: Intelligence Bureau (IB) planned a secret mission (Operation India One) to eliminate MAF a Naxal organisation based in the remote village of Bhagatpur, Bihar. ACP Gautam Dhaliwal of Delhi Police got involved in the mission after arresting MAF chief in a Delhi raid. Charulata the second in command of MAF became more violent after their chief's arrest. Gautam then went to Bhagtpur on secret mission after IB's instruction where he met his college friend Nisha who was running a NGO there for betterment of people of Bhagatpur. Gautam's interactions with Nisha and villagers changed his perception about the mission and he took a drastic decision which changed the course of his life and Operation India One. The plot showing the true face of Indian politics take many turns to reach an action packed climax.

Thriller : The checkmates of Indian politics to retain chair was beautifully presented in the book. The detail account of Naxal problem, its effect on local people, inefficiency of our system in curbing the movement and the political games played in its shadow comes out well with the narrative. The action sequences are written superbly which transported you straight into the war zone.

Spoiler : Author's vision about the story is not clear in the plot. At one point the characters supporting the mission turns against it and at other point they became part of it and then again changes their view. In highlighting the political game, characters are not properly explored. The plot lacks the emotional connect with the characters of the story which further disconnects it from readers. I found the language repetitive and uninteresting in accordance to the plot.

Verdict : The book is a nice read to see the ugly face of Indian politics and apathy of Naxal affected areas but it fails in its impact and vision.