"The smallest coffins are the heaviest." 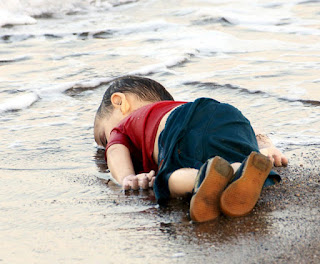 The image of three year old Aylan Kurdi wearing bright red T-shirt and shorts and lying face down in the surf on the beach town of Bodrum, Turkey is enough to raise the question on our humanity. The boy was on a ship that capsized due to overload while going from Turkey to Greece. This wasn't the only case of boat capsizing, many boats carrying the refugees out of war-torn Syria have facing the similar fate.

The four and a half year long civil war in Syria have resulted in lost of life and childhood of Syrian children. The fear of dying have forced Syrian people to take refuge in neighboring countries of Europe and Asia. In their move to leave their country quickly they often overload the boats which resulted in mid sea capsizing of boats. But their problems just not ends there. Many countries are refusing entry to them and if they are allowed in some countries they lived in conditions which made them wish to die in war than to escape and live in fear and disgust. The so called rich Arab countries which are making the biggest and tallest buildings are so poor on humanitarian front to let children die by refusing any refugees on their soil. The UK government who was also denying entry to refugees is now ready to accommodating them after public outcry on social sites on seeing Aylan's image at Bodrum coast. Germany is the only country in Europe which have no restrictions on entry of refugees.

Sometimes I wonder what is the role of United Nations in the world when they don't have any powers to save life of millions of innocent people dying in such wars? Why don't they provide safe passage to people who are willing to move out of war-zone for a better life? Why USA who put its nose in every world affair is not inter mediating in resolving Syrian crisis? The conditions in Syria have also give rise to influence of ISIS in that region which further adds to threat to the world. 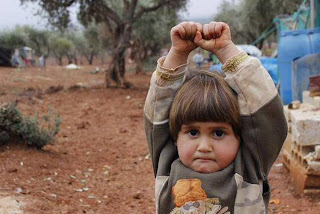 We as humans have failed in becoming a decent species. Our ever increasing desires and ambitions have reduced this beautiful world to a place to vent out our frustrations. The children who are unaware of any ill happenings around them suffers the most in any crisis. A hands up image of a Syrian child after seeing a camera still haunts me it describes what type of live we are giving to our children and what kind of world we are making. I appeal to all the nations which are still unmoved by the refugee crisis to welcome them with open hearts. We often say that today's world is inter connected but I don't think people in India have any concern about what is going in that part of the world. Few channels and newspapers are giving time and space to this news.

A world without children wouldn't be a nice place to live. As humans we must stand up for the cause of humanity. Here in the end I would also like to pray for all the children of the world who are dying of hunger, violence and diseases. May God give them opportunity to live which we humans have snatched from them.

Salim-Suleiman's latest video song 'Khalipan' (The Void) written by Amitabh Bhattacharya and sung by Salim presents a horrifying image of world without children.