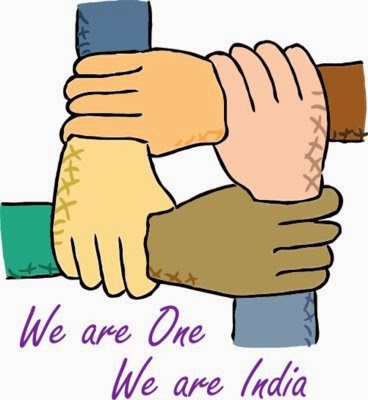 Independence Day, one of the few days when we remember greatness of India. Feels proud of being Indian, sing patriotic songs,watch patriotic movies and enjoy this whole day being a holiday. But forget these things after that. Are we Indians only for day or two? Do we really feel proud of India and Indianness? Sadly answer to this questions comes out in negative. One bad habit of Indians which I would like to change for our India is not thinking India as their Identity.

We can find a Hindu, a Muslim, a Sikh, a Christian, an upper caste, a lower caste, majority, minority, a Bengali, a Marathi, etc,etc. but not Indians. This species is either extinct or is critically endangered species. We have forgot our roots, our composite cultures, our blended traditions, our common problems, our similar motives and are projecting ourselves different from one another just to ruin at the hands of few politicians who bake their bread on fire of such issues. We are divided in regions,religions and color.

After Independence the new government took the steps to unite India into one nation under Sardar Vallabhbhai Patel's monitoring who took this daunting task in his hand and created The Union of India. It was possible because we have combined histories, the problems we faced under Britishers were not different from each other, they exploited us and our nation in the same way. It was only amalgamation of our strong intentions against them and for our country which gave us independence.This independence appears in danger when we fight with each other on bases of our differences. We all are one even if we are separated in our cultures,traditions,geographical regions,religions,cast and creed, that's what makes us Indian and we should proud of our Indianness.

Moreover constitution of India grants us similar rights which we should respect equally for others as we deserve for us. This bad habit of not considering India as our first identity is the root cause of many other problems prevailing in the country and only leads to violence and hatred for each other. India is build on value of love so we should concentrate to spread only love. Next time when someone ask you who you are? Tell him/her that you are Indian from India. Here is the song Bharat Humko Jaan Se Pyara ( India is dear to us more than our lives) composed by A.R.Rehman and sung by Hariharan which we should remember in such difficult and dividing time :