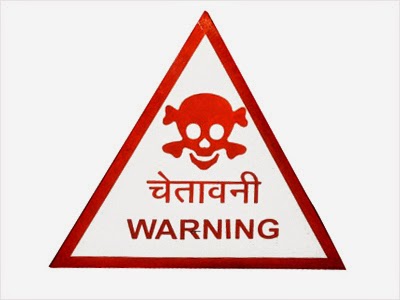 If you are thinking I am joking or spreading some rumor then you are wrong. India is in real danger not from any neighboring country,not from any terrorist,not from any nuclear or biological attack but from hatred forces residing within the country. Before I explain it further I would like to ask what India is? How it is unique and different from other countries in the world?

The answer is simple India is a country where all religions, cultures and traditions lives in harmony which is its uniqueness. No other country can vow for such diversity of language,culture,religion,etc as India can. What makes us different from other countries of the world is that in spite of so much diversity we live as one and with unity but now I feel this is in danger because of some people of this country. Unity makes India and if this is in danger India is in danger.

Many recent incidents and statements of politicians appears to be against the minorities of the country like a Goa minister's statement that stage is set to make India a Hindu-rashtra ( Hindu Nation ), targeting Sania Mirza by Telangana BJP  MLA for being brand ambassador of the state, force feeding a fasting Muslim by Shivsena MP's , series of riots in UP from Muzaffarnagar to Muradabad to Saharanpur to Rampur as if part of a planned move by some anti-national forces, needlessly highlighting Article 370 related to Jammu and Kashmir, promoting baseless and fact less ideology of Dina Nath Batra among school children etc. All such activities have increased since the new government came into power and our PM who have plans for every petty issue have nothing to say on this important topic.

My main concern lies not with those politicians whose interest lies in gaining vote bank by spreading such hatred but I fear for the fact that masses have developed hatred for each other evident from social media comments and shares by them. The influence of corporate houses has also increased in TV media, since their motive is minting money they can run any damn news for the sake of money. If you observe certain news anchors and news channels you will find them airing only one side of the story hiding or suppressing the other side further increasing hatred in country.

India does not belong to any religion,party,region,community and cast but to each individual living in India. We respect each others cultures and traditions that's why enjoy each others festivals, rumor mongers and some political parties finds no gain in togetherness they wants us to divide. The formula of divide and rule is still prevalent and we all are becoming its victim. If those who believe in love,togetherness,peace and harmony would not stand up for the country then that day is not very far when we see neighbors killing neighbors and country again divided into small blocks. Today Yash Chopra's Dhool Ka Phool's song " Tu Hindu banega na musalman banega insaan ki aulaad hai insaan banega"( You will not become a Hindu or a Muslim but a human being child of a human.) is resonating in my mind. We try to make our children a good Hindu or a Muslim but never a good human being and a good Indian. I am leaving you with this song :