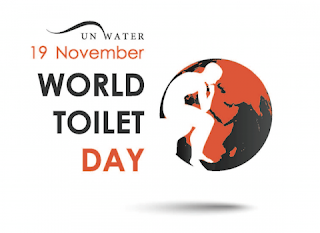 World Toilet Day is celebrated on 19th November to raise awareness about the people in the world who don’t have access to a toilet - a basic human need. It also focuses on the health and hygiene problems arising due to improper sanitation. 2.4 billion People do not have adequate sanitation. 1 billion people still defecate in the open and shamefully India is home to half of these people. Poor sanitation increases the risk of disease and malnutrition, especially for women and children. Women and girls risk rape and abuse, because they have no toilet that offers privacy.

In India not only villages but cities are also facing this problem. Even in the capital of India - New Delhi people defecate in the open compromising their dignity, health and privacy. Besides creating health problems, open defecation give rise to safety issues for women and girls. Most of the rapes reported in rural India are of those girls and women who went to defecate in open alone. Some mischievous elements of society waited for such opportunities to execute the ongoing of their dirty minds. Lack of toilets also leads women and girls to compromise their menstrual hygiene.

The lack of toilets is not the only problem. Improper toilets are also a problem. From improper toilets I mean toilets lacking equality. A physically challenged person needs a special toilet, a woman or a girl for menstrual hygiene required a toilet having sanitary pads, so there must be toilet for different needs also. But in a country where even basic toilets are scarce you can't hope for toilets for special needs. Lack of toilets resulted in unhygienic environment which further causes deadly diseases among children thus snatching valuable lives of our children.

Apart from government we should also take things in our hands. Ensure those working in your offices and houses as helpers are using functional toilets in their homes. If not you must encourage them to do so and if possible lend them loans to do the same. Those who have relatives leaving in villages check for toilets there and initiate building of toilets in those areas. Government should not only erect toilet buildings but should also take care of their cleanliness and maintenance. #wecantwait more for this basic facility to reach every home so we must act fast and more responsibly.

You can visit World Toilet Organisation's website to know more about this problem and to donate for this cause.