IS - Islamic State or International Slackness

IS - Islamic State or International Slackness. 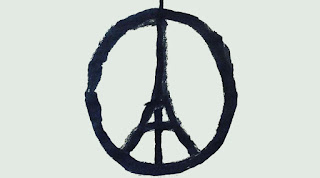 Paris Attacks on 13th November 2015 which killed around 200 people opened world's eyes to a new threat to the world peace i.e Islamic State or IS. It was not the first attack by IS but it became their 9/11 moment which garnered them worldwide headlines and hours long news coverage. Facebook even offered safety check feature for people affected by the attack and France flag as DP (display picture) for those who want to show their solidarity with Paris and France. For few more days people will outburst their anger on social sites and then terrorism will go out off discussion from public debates.

Islamic State is creating havoc from last one year or so, it has captured a large part of Iraq (including some oil well), Syria and Egypt. Islamic State is involved in killing of innocent people of these nations which forced many to leave their country and demand refuge in other countries. The reckless attitude of America and European countries for happenings in these middle eastern countries have helped in spreading of their terror networks in other parts of the world. They are using internet to spread their hate messages converting many innocents to be their sympathizers and support their cause. Turkey and other such countries are buying oil from IS thus funding them with money. Many NGO's in America and Europe are also providing funds to them. They are using sophisticated modern weapons made in America, Iran and European countries. This international slackness towards their activities is giving them more power and money.

When Russia attacked Syrian hideouts of IS and drive them away from many parts of Syria neither Europe nor America supported this action. Are they using IS as a tool to spread Islamophobia? The sudden emergence of IS immediately after killing of Osama-bin-Laden is also a matter of suspicion. Why not ban the organization selling ammunition to them? Why not ban NGO's providing funds to them? Isn't terrorism used as a tool to sideline a community which was also suffering from these terrorist attacks? Few know that Beirut in Lebanon was also attacked by IS two days before Paris attacks killing at least 43 people. Attacks in Syrian mosques & residential colonies, Iraq's minorities, Nigeria, Algeria, Saudi Arabia etc were also conducted by IS without much international reporting and coverage.

The time has come to form an international community which not acts as a puppet of developed nations like United Nations. A body which can handle all crucial issues of human right violation, terrorist funding, illegal arm trade, international drug peddlers and other such issues more strongly than United Nation did today. World stood together in tough time is a good gesture which would not be limited to attack on Europe and America. I also support PM Narender Modi and other world leaders' demand to define terrorism to separate it from religion and for strong actions against their sympathizers. Pray for peace for Paris and for the world.
Beirut Attacks ISIS Islamophobia Paris Attacks refugee crisis Syrian Crisis terrorism United Nations World Peace