The Lost Symbol by Dan Brown is third in the series of Robert Langdon adventures after Da Vinci Code and Angels and Demons. Robert Langdon a symbologist from New York is destined to solve another puzzle of mysteries of the mythical world hidden in secrets of Washington D.C. 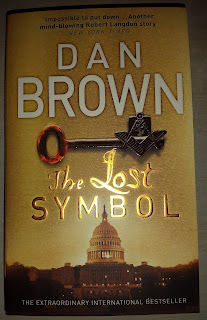 Cover : It's a simple cover with a key having symbol of Masons which connects this book to masons and there secrets. The US Capitol building in the bottom signifies involvement of this building in this mystery. Both images suits to the title and story of the book, hence full marks for that.

Plot: Robert Langdon's old friend Peter Solomon's secretory calls him for an urgent lecture in US Capitol building due to unavailability of any person after the assigned speaker became unavailable. He also urged Langdon to bring a sealed box once given to him by Solomon. He also send a private jet to pick him from New York to Washington D.C. The truth revealed after reaching Capitol building put Langdon in a fix. Peter Solomon's kidnapping to reveal some hidden secrets of history brings Langdon face to face with CIA chief Sato.

On the other hand Katherine Solomon a Noetic Scientist sister of Peter Solomon was excited about some new revelations of her experiment was eager to share them with her brother who was unreachable on his phone. She was unaware that someone was planning to kill her. Langdon caught between Solomon's captor and CIA in trying to uncover the mystery of ancient symbols. Will Langdon solve this mystery of symbols? Who is trying to kill Katherine? Who is behind Peter's kidnapping? What is Washington D.C.'s history hiding which has became threat for national security. This impossible to put down book will reveal a new world to you.

Review :  You were always on the move while reading this book. The style of writing is so that you remain restless like the characters in the book to solve the puzzles coming on the way. The way fact and fiction are blended is commendable and extraordinary. The book not only is an entertaining read but also left some questions in your mind to think over and over again. The end is bit stretched but that extension is enlightening than boring. An informative read invoking positive thoughts.

Verdict : Go grab your copy of this book which keeps reader always on the go. Interesting, astonishing, enlightening, entertaining and informative read.