Train To Pakistan is a classic novel written by eminent writer, columnist, humorist and satirist Khushwant Singh in 1956. This book is a hard hitting account of atrocities during the partition of India. I have bought a paperback edition published by Penguin India. 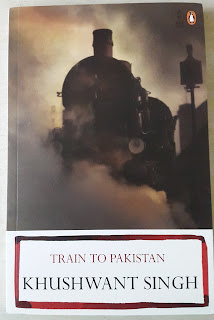 Cover : Cover is showing a steam engine train of India of early year of independence. Though it didn't give you idea about the content of the book but you came to know the effect of this picture after reading the book.

Plot: The story is based in a village Mano Majra on the border of India and Pakistan. After partition of the country Muslims were migrating to Pakistan and Sikhs and Hindus to India. Mano Majra was the only village unaffected by the partition here Muslims, Sikhs and Hindus were all leaving peacefully. Juggat Singh aka Jagga a bad character in police record was in love with Nooran daughter of Muslim priest Imam Baksh. A robbery and a murder happened in Mano Majra resulted in Juggat's arrest under suspicion. Police also arrested Iqbal a political activist from Delhi who came to calm down situation in border villages. Every thing was fine until a train full of corpses arrived from Pakistan. This incident made the atmosphere tense in the village. Magistrate Hukum Singh's order to police superintendent further increased the drift among the communities. Muslims were forced to leave the village. Police suddenly decide to release Juggat Singh and Iqbal when a train going to Pakistan with Muslims of Mano Majra was planned to be assassinated by a group of Sikh youths. Juggat Singh also had a role to play. What he did? What happened to the train?

Review : The book presents an unbiased account of the tragedy of partition. How communities living peacefully from centuries turned violent against each other just by a line drawn on paper. You will realize by reading this book where the seed of animosity was sown between the communities which affect the Indian diaspora even in present time. Kushwant Singh with his simple yet powerful style of story telling left you with some questions to think as a human being. A story which beautifully highlights the human emotions and displays the tragic turn of events with sincerity.

Verdict : A must read of you want to know about the India at the time of partition. It will also help to understand current political situation of the country.