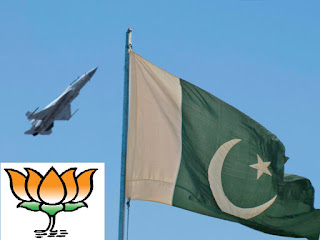 The ruling party of India always comes up with novel concepts to spread their ideas. After successful campaigns of Rath Yatra, Chai Pe Charcha, Achche Din, they have come out with another interesting idea i.e. Ticket to Pakistan to send all critics to government and its policies to Pakistan. They have partnered with Hafiz Sayeed in Pakistan who will receive the people send by them with open hands. When Hafiz Sayeed was asked about how he would accommodate Indians in already populated Pakistan he said that he was sending thousands of Pakistani residence to India from several years after fore-sighting this scenario.

BJP also revealed the hidden meaning of their name as Bhartiya Janata to Pakistan. While briefing a media gathering their spokesperson said that they were working on this type of travel agency even before 2014 general elections. The idea is brainchild of BJP MP from Bihar Giriraj Singh and Yogi Adityanath, Sadhvi Prachi and Sakshi Maharaj promoted it to their full capacity. Now after BJP president Amit Shah's nod party officially announced their travel wing to cater all tasks related to it under Kailash Vijayvargiye who wants Shah Rukh Khan to be the first person to take benefit from this scheme.

This travel wing along with handling Prime Minister's foreign tours would provide free transportation to Pakistan for all those opposed to them. 'This looks like a daunting task but we are fully prepared to do this with RSS support,' a BJP party worker said on promise of anonymity. 'Shah Rukh Khan is our favorite and he will be the first person to get his ticket from Prime Minister himself,' he further added. Opposition is terming it as a gimmick for Bihar poll because none from the opposition have received an invitation for Ticket to Pakistan.

It is not yet cleared that this scheme is meant only for Muslims or others could also benefit from the scheme. BJP has also not announced the amount they have given to Hafiz Sayeed for preparing for the project in Pakistan. The people are waiting for travel packages to other countries as well but that seems impossible since India have faced only one partition its history.
Amit Shah BJP Griraj Singh Kailash Vijayvargiye RSS Sakshi Mahraj Satire Shah Rukh Khan Ticket to Pakistan Yogi Adityanath