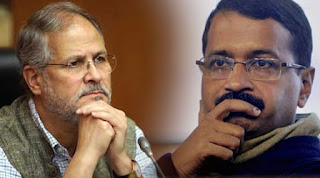 Bhiku Matre didn't find any competition when he claimed himself the king of Mumbai in the movie Satya but here in Delhi the situation is different and the public of Delhi is confused about 'Who is the king of Delhi?' The problem they never faced since 1993 the time Delhi was granted partial statehood and held its first assembly election. We never heard news about tiff between elected CM (Chief Minister) and Central Government appointed LG (Lieutenant Governor). Their fights have made public servants directionless and people of Delhi hopeless.

Arvind Kejriwal who doesn't fit in the public known definition of political leader never in his election campaign speeches explained that he required full statehood before working on his poll promises. Either he was unaware of the procedure of working in Delhi or he was just luring voters at that time with fake promises. I am not saying that he is not doing anything actually I want to praise him for increase in education and health budget but the scenario he has created to expose the wrong doings of Modi government is not suitable for a person sitting on CM's chair. I am sure there are many better ways to handle the situation than to ridicule a constitutional post.

Najeeb Jung who was known as a sincere educationist and bureaucrat before being LG of Delhi has now reduced him as the puppet of Central government. It is an open secret that his actions are directed by Home Ministry and whatever hurdles he has created in functioning of an elected government are political motivated. He must resolve the differences amicably because at the end people matters the most in a democracy, the decisions taken by Mr Kejriwal wasn't for his benefit but for the benefit of the people of Delhi and raising objections to his every action is demeaning a constitutional post in people's eye.

I am personally not in the favor of decorative posts of LG's, Governor of states and President as they don't serve any help in the functioning of government instead I believe in a people powered body at that level with more powers to sign and decide for the bills send to them thus to make the process more democratic with the involvement of citizen. Anyways this is another issue of discussion now both the center and state government must understand that only people of the country are King in a democracy and their interest shouldn't hurt in their battle of supremacy. I don't understand why Narender Modi who fought a case against the Governor for unnecessary interference in government functioning as a CM of Gujarat now believes that Lt. Governor is the government in Delhi. Only Delhihites are Kings/Queens of Delhi.
Arvind Kejrivaal Chief Minister decorative posts delhi Fresh Views Home Ministry Kejriwal vs Jung Lieutenant Governor Modi Sarkar Najeeb Jung News puppet