Ramayana The Game of Life - Shattered Dreams Book 2 is the sequel of national bestseller, Rise of The Sun Prince the first part of this series. It is written by Shubha Vilas, a spiritual seeker and a motivational speaker who holds a degree in engineering and law with a specialization in patent law. It was published by Jaico Books. This book moves forward from Bal Kanda of the original work. Twelve joyful years have passed in Ayodhya since the wedding of Rama and Sita at the end of Book 1. 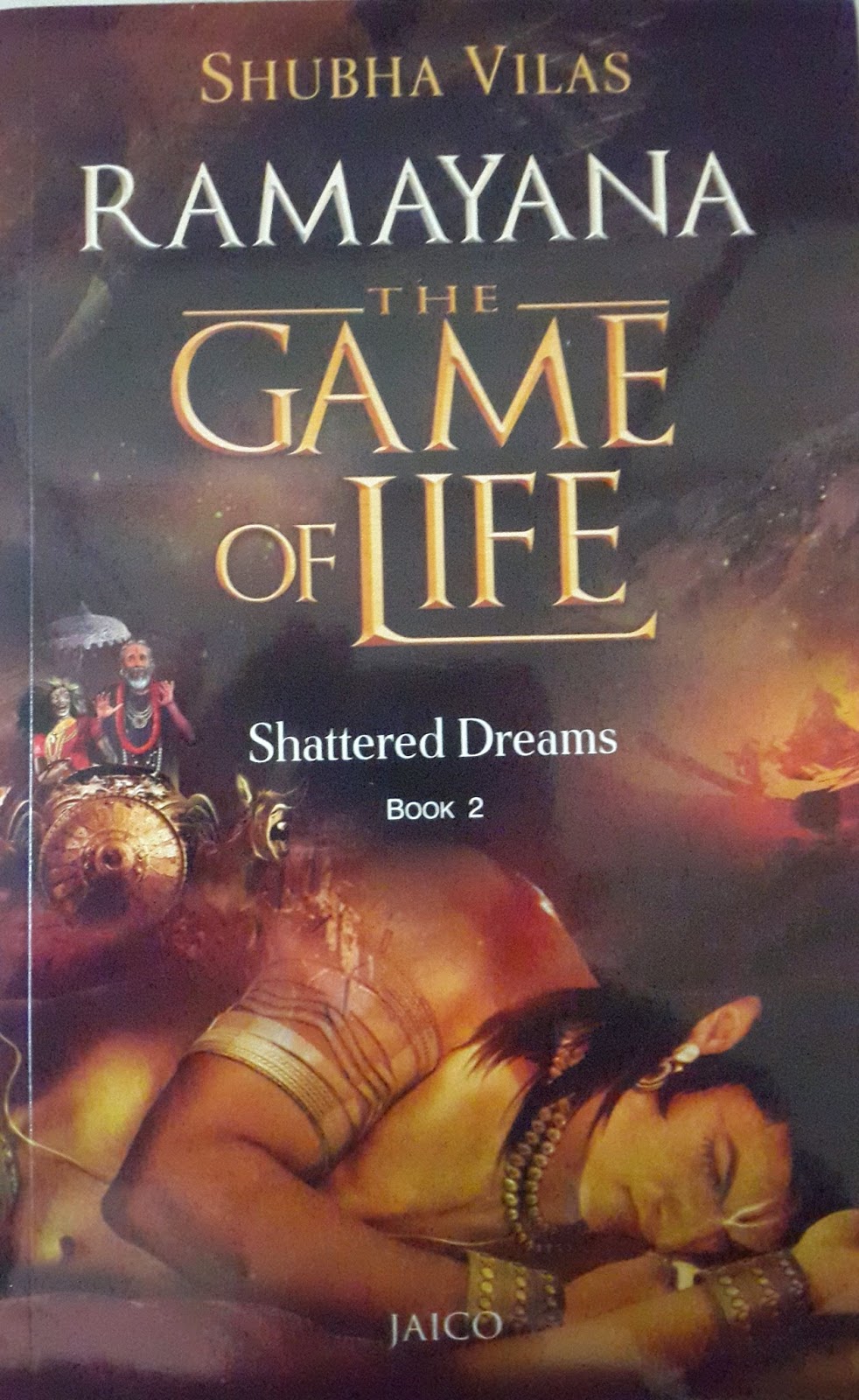 Cover : Cover design is nice. It shows Dasharata on chariot in his nightmare which is an important part in this book. The image of Rama sleeping peacefully in dreams while Dashrata's dreams are shattering for what is happening in his life. The cover is neutral to the narrative.

Plot : The story of this second part of the series Ramayana The Game of Life starts with Dashrata's deteriorating health and his decision to crown Prince Rama as the king of Ayodhya and ends with Rama living in exile in the Jungle with his wife Sita and brother Lakshmana. He is in exile after Kekeyi the second wife of his father Dashrata and mother of his step brother Bharata redeem her long pending wishes from the king Dashrata which she earned from him after saving his life at two occasions. What evokes her to ask the fulfilment of these wishes after so many years? Why Dashrata stops coronation ceremony of Rama ? How Rama's life starts in exile? This story revolves around these questions.

Highs : We are reading,hearing,watching and even enacting this story from so many years that we are accustomed to it yet after reading this book it appears to me all new. This book highlights the different and unnoticed aspects of Ramayana in thrilling and adventurous way with lots of emotions and drama. Dashrata,Rama,Lakshmana,Kekeyi,and other characters evolved in a new light which elaborates things about these characters which were previously unknown or unnoticed. The simple yet spine tingling narrative keep you hooked to the book from start to end even when you are aware of the future happenings. This is possible only through great writing. The footnotes helps us to understand the prospective of the book and it's relevance in today's time.

Lows :  It is difficult to find lows in this book owing to the characters it was dealing but yet I would say that book is glorification of his Lord from a true devotee which finds positivity in each aspect of his Lord thus becoming biased at instances which don't reveals the other side and other aspects of the story for example Why Rama was ready to be king without any competition between brothers just because he was elder? Is this just? Such question remain unanswered.

Verdict : If you want to relearn the Ramayana and understand The Game of Life in Ramayana with a different prospective you must read this book which not only reveals the secrets of Ramayana but tells it in interesting and captivating way.