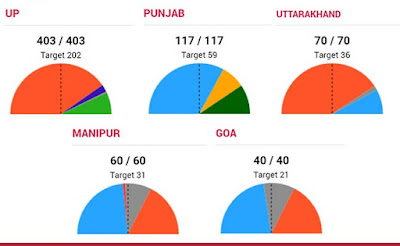 The result of the assembly seats of five states i.e Uttar Pradesh, Uttarakhand, Manipur, Punjab and Goa stood at 2 – 3 where Modi’s BJP won Uttar Pradesh and Uttarakhand with a humongous majority while Congress clean sweeps Punjab and has an edge in both Goa & Manipur which indicates they are likely to form government there. In Uttar Pradesh and Uttarakhand there is clear advantage Narender Modi as he single handily lead the campaign and sidelined every opposition. Congress – Samajwadi Party alliance against Narendra Modi’s Bhartiya Janata Party failed miserably even though his speeches, his actions were labeled by the opposition as ways of polarizing the people of the state.

Punjab witnessed victory of Capatain Amrinder Singh more than the Congress party who’s Vice President Rahul Gandhi was initially against fielding him as the Chief Minister. In Manipur Congress’s Chief Minister Okram Ibobi Singh succeeded in securing his fourth term as the chief minister. Irom Sharmila lost to him pathetically. The lady who gave all his life to the cause of the people can’t secure even hundred votes. The surprise in Manipur is the tremendous debut of BJP which won twenty one seats. Uttarakhand also gave clear majority to BJP, even the rebel MLA’s didn’t post any threat to the party there. Aam Aadmi Party performed poorly both in Goa and Punjab. In Goa it didn’t even open its account and there Punjab performance was poor than in the Lok Sabha elections of 2014.

These elections have some teachings not only for the people who lost and won but for all of us. I have tried to include them in this list:

Elections will come and teach us something always. This is the flavor of democracy that somebody wins and somebody loses. I hope those who are forming government do good for the people and the country. Till next post God Bless India.