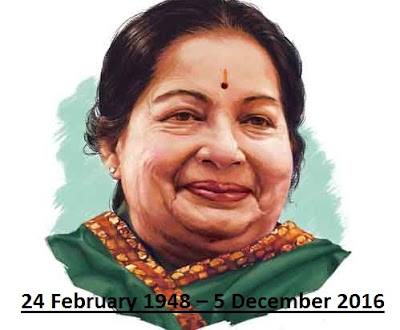 Jayalalithaa Jayaraman, J Jayalalithaa or Amma for her fans and followers died after 75 days illness in Apollo Hospital of Chennai. She was the stalwart woman politician of the southern India who elected as Chief Minister of Tamil Nadu five times in the span of around 30 years. As a leader of AIADMK the party which she got from the death of her political mentor MGR in 1989 she took the party to the apex of being the kingmaker in the central government. As an observer of Indian politics from years I have not seen the threads of tension on her forehead even in the difficult of times. One can always remember her always smiling ways with soothing expressions.
Her rise to the top spot of the party and to the post of Chief Minister is marked with controversies of being linked romantically to M.G.Ramachandran (MGR) or to her authoritarian behavior in disrespecting members of party and the opposition but no one can deny her hard word and reach to every single person of her state. Her schemes of mass appeal like that of Amma Canteen which serves food starting at Rs 1 along with other programs has made her darling of the masses. This is the reason for people thronging to Apollo hospital, Chennai from all parts of the state and were praying for her speedy recovery since 75 days. Many have lost their balances after hearing the news of her death. I fear people committing suicide or damaging themselves in other ways in 'Hero Worship' after her death as is the trend in southern India at the time of death of big leaders and movie stars. I hope people will act intelligently this time.
Jayalalithaa has also played an important role in national politics from many years. She was among the leader of the parties which stopped Modi wave in 2014 general elections when her party won 37 out of 39 seats in Tamil Nadu. She was the woman of courage and determination. Even after her removal as the Chief Minister for being convicted in disproportionate assets case she remained strong and came out powerful after her acquittal from Karnataka High Court to regain her position.
In this time of grief I can only pray for her and request her followers to maintain calm in the state of Tamil Nadu. May Her Soul Rest In Peace.