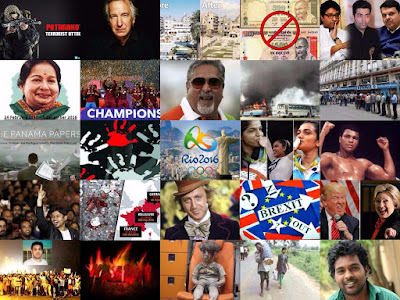 The start of 2016 was marked with Pathankot attacks and after that their was no looking back at the bad stories of this year. Pathankot attacks, Uri Attacks, Rohith Vemula suicide after which nationwide student's protest was there against the government which give rise to anti-national debate after sloganeering in JNU campus Delhi, rise of Kanhaiya Kumar, this year also saw several terrorist attacks in Brussels,Berlin, Turkey,etc and the continuing struggle for life of people of Syria, if there was a fight for race to President's post between Hillary & Trump in USA so there was consensus on Brexit in Britain, Mohammad Ali,Jayalalithaa,etc left us this year.

An important part of India Kashmir remain in unrest after the death of militant Burhan Wani which still not came out completely from the tense situation. The demonetization of Rs 1000 & Rs 500 notes during the end of the year halted the nation which finding it difficult to come to normalcy in the near future, Vijay Malaya escaped the clutches of government and there seems less seriousness on investigations on the names come out in Panama Paper leaks, who can forget the picture of Dana Manjhi carrying his wife's dead body on his soldiers or of long queues outside banks after note ban. This year was full of troubles around the world.

But that doesn't mean there were no instances of happiness or togetherness. Free Hugs movement in America try to spread love in the wake of racial abuses, Rio Olympics and T20 Cricket World Cup championship brought togetherness in the world, ISRO successfully launched many satellites in space and world stood united in the air of terrorism. It was a mixed year we can say but we can always hope for a better year, for better future and for better conditions for mankind to flourish. Happy New Year.

Here I have made a video showcasing almost all the events of the year.


‘This post is a part of Write Over the Weekend, an initiative for Indian Bloggers by BlogAdda.’
Antinational Dalit flogging Happy New Year Kashmir Unrest News patriotism Rio Olympics 2016 Round Up Syrian Crisis Throwback2016 Video Post WOW Year Round Up