In Indian films songs are as important as salt in the food. Sometimes movies failed but their songs cover the losses and good songs many film-makers believes is a sure shot formula of a hit. I love songs and almost heard all the songs released in the year 2016. I have selected Top 10 songs of the year which I think are famous and popularized the films. 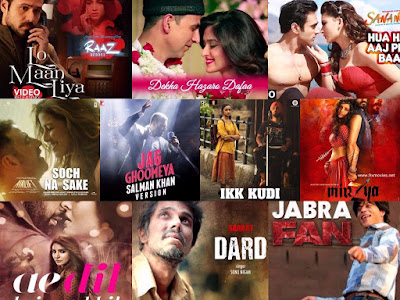 1. Ae Dil Hai Mushkil (Ae Dil Hai Mushkil) : This year too Arijit Singh remained top of the charts. This song beautifully summarizes the film and emotions dealt in it. Amitabh Bhattacharya's lyrics superbly works with Pritam's music. Others songs like Bulleya is a pop sufi song by the same duo in Amit Mishra and Shilpa Rao's voice. Channa Mereya is another song from this film which deserves a place in this list but omitted to accommodate other songs but this sad song again in the voice of Arijit Singh works magic in your ears. This album deserves all music awards this year because Cutie Pie,Break Up Song,Aaj Jaane Ki Zid Na Karo, Alizeh are all good songs. Standing ovation to Pritam and Amitabh Bhattacharya for this great album.

2. Jabra Fan (FAN): Fan has only one song and that too for promotional purposes but this has become like an anthem for all fans to show their love for their favorite star. Sharukh Khan as Gaurav Channa's performance in this song like a die-heart fan has bring out the emotions of all fans for their stars. #FanAnthem is composed by Vishal Shekhar, written by Varun Grover and sung by Naksh Aziz. It was translated in many languages which sung by different singers to spread the craze around the country.

3. Jag Ghoomeya (Sultan): Again a Vishal-Shekhar song that tops the chart. All versions i.e Rahat Fateh Ali Khan , Salman Khan and female version are all hits. Everyone was humming this Irshad Kamil written romantic soulful melodious song before the release of the film. Salman's dance move where he move his hips laying down on the floor was also caught by his fans soon after it come out.

5. Ikk Kudi (Udta Punjab): Udta Punjab is remembered one for the controversies surrounding it and second for this song sung by Diljit Dosanjh. Lyrics by Late Shri Shiv Kumar Batalvi teaches you how you can praise innocence of a girl. These lyrics combined with Amit Trivedi's music and Diljit's voice transports you into some other dimension where you feel the calmness,spirituality and the healing power of this song.

6. Lo Maan Liya (Raaz Reboot): Emraan Hashmi is the most lucky actor of the last decade with the kind of songs he got in his films. Every film of his whether it worked on box office or not has great music numbers; Raaz Reboot is the latest addition to it. Lo Maan Liya again a song sung by Arijit Singh (Music director - Jeet Ganguli) has entered this list but other songs like Raaz Aankhein Teri, Yaad Hai Na are also equally good songs.

7. Mirzya (Mirzya): Gulzaar sahab always surprises with his lyrics and in this song too the usage of words like 'Ye Wadiya Doodiya Kohre Ki' (Valley of White Milky Fog), Laal Chingari Ishq Di (Red Flames of Love),etc makes you wonder how he thinks about such analogue. It is sung by multiple singers Wadali Brothers, Daler Mehndi, Sain Zahoor, Akhtar Chinnal, Nooran Sisters that in the multi flavored music of Shankar Ehsaan Loy creates a passionate aura of love. If the movie has half the passion of the song it would be in the list of timeless love stories.

8. Hua Hai Aaj Pehli Baar (Sanam Re): Amaal Malik's music did wonders in many film this year. Sanam Re is a musical film having almost all melodious songs which are hit too. This song sung by Armaan Malik, Palak Muchhal, Amaal Malik and written by Manoj Yadav along with title track are more famous than film.

9. Soch Na Sake (Airlift): This song is an adaptation of Punjabi song and what a beautiful romantic song. Arijit Singh who has sung this song with Tulsi Kumar has become the king of such soulful melodies. Music of this song is composed by Amaal Malik and is penned by Kumaar.

10. Dard (Sarbjit): Sonu Nigam's velvety voice enhances the pain of this song. You went into the turmoil of character of Sarbjit. Jaani,Rashmi Virag has penned this moving song which is composed by Jeet Ganguli.