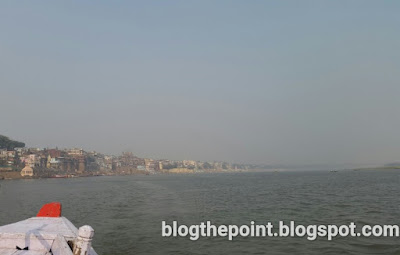 Varanasi Trip happened suddenly. I went there for attending a marriage where my brother have to go but at last moment he send me in the 'Baraat'. An extra day was there in the itinerary for all those who want to roam around in that ancient city. Our births were booked in Shiv Ganga Express, looking at the winter fog spare time was also considered for journey but fortunately train was on time and it gave me two days to explore the city.


People in the baraat has planned for the outing on Varanasi ghats in boat for that extra day but when we reach on time I want to utilize that day too since the marriage was in the evening. I took an auto to Sarnath. Sarnath is a Buddhist pilgrimage. It is where Gautama Buddha first taught the Dharma, and where the Buddhist Sangha came into existence through the enlightenment of Kondanna. Later King Ashoka has developed Stupa and Buddhist Monasteries there. It is protected by Archaeological Society of India and things evacuated from the site including remains of Ashoka Pillar is kept in the adjacent Sarnath Museum.

Mobiles,camera,bags, etc is not allowed inside Sarnath Museum so they provide lockers to keep your valuables. Modern day Buddha temple is also constructed near Sarnath where 80 ft high Buddha statue is constructed in combined operation of India and Thailand. Singhpur, a village approximately one km away from the site, was the birthplace of Shreyansanath, the Eleventh Tirthankara of Jainism, and a temple dedicated to him, is an important pilgrimage site for Jains. Sarnath complex is peaceful and a good place to spend your time in the ancient history. Weaver's village is also in that area and there are shops where you can see the work and buy the things. I came back to hotel that day after spending around three hours in Sarnath to get ready to attend marriage in the evening.


Next day groom's relative from Varanasi took our group to Dashashwamedh Ghat. He booked a motor boat for us which gave us ride of the Ganga river and we saw almost all the ghats from the boat. Boat man rode us across the river in a beach type area which is actually the flood plain of the river. We enjoyed there and returned to the hotel to get ready for the train back to Delhi. I hope to go there again to see the Ganga Aarti which I missed on both the days due to unavailability of time. I also tried to visit Kashi Vishwanath Temple but it was two crowded that all my time would have passed there. There are some Pandit agents which are providing direct entry from the back door. Ghats need to be more cleaned and maintained keeping in mind the ancient history of that place.