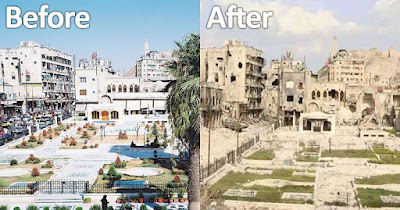 "Don't forget Aleppo, don't forget Syria" was shouted a suspected Turkish police officer after he shot dead Russian ambassador to Turkey Andrei Karlov in an art gallery in Ankara. His act of killing is highly condemnable and he was shot dead for the same but what he said must also be the concern of the world for the sake of humanity. We must think about Aleppo and Syria.

The civil war going on in Syria has resulted in the destruction of one of the oldest city in the world Aleppo. Russian bombardment has not spared even the schools, hospitals and residential area. The conflict started in 2011 with demonstrations against the Syrian President Bashar-al-Assad. He was supported by Russia while USA is against him. So when the people of Syria started peaceful demonstrations against him which some believed were sponsored by USA were dealt with force from president Bashar-al-Assad. This conflict gets complicated when Islamic State captured parts of Syria and joined the protesters in garb of conflict. It gave upper hand to Russia to freely attack Syria to eradicate rebels and Islamic State terrorists. As a result Syria has become a conflict zone where people are evacuating their homeland to save lives of their families.

The ancient town of Aleppo has been destroyed completely in these attacks. The ruins of civilization have replaced once structure of human prosperity. The world is silent for this inhumanity. Some believes Muslims deserve this since they are spreading terror in the world forgetting that terrorism is now an organized syndicate which works for money. It has nothing to do with religion. The innocent children, women and men who are losing their lives in Syria are human first. They have basic necessity of food and shelter like any human being. The ignorance of world to the cause of those affected with such tragedies making them prone to accept the ideology of terror. They feel that they can make their voice heard in that way.

I hear people saying that every terrorist is a Muslim. But they forget that every oppressed around the world is also a Muslim. Be it in Kashmir - India, Rohingya Muslims of Myanmar, Muslims of Chechanya in Russia, Muslims in China where they are prosecuted for following their religion, Iraq and Afghanistan where cities destroyed in search of weapons of mass destruction which were never there, similarly there are many places in the world where Muslims get second class treatment from the majority or the ruling class. I am not saying that you get a license to kill if you are a victim but world needs to look with sympathy and humanity to the issues faced by these people around the world and try to find out the solution for the same. I am ending this post with the prayers of peace for the people of Aleppo and rest of Syria. #PrayForAleppo. God Bless The World.
Aleppo Andrie Karlov Bashar-al-Assad current affairs humanity Islamic State Rohingya Muslims Russian Ambassador Syrian Crisis terrorism Turkey world