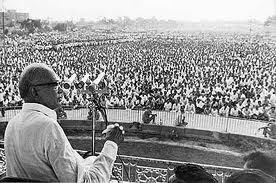 She has lost all ideals of this great republic. I regarded his father as my elder brother and her as my niece that's why I met her to resolve our differences. It is difficult to believe that power as such adverse effects. A whole network of people is against her today and she is behaving like a dictator,I don't know why she is behaving like that ? Today I read Ramdhari Singh 'Dinkar's poem 'Singhasan Khali Karo Ki Janata Aati Hai'( Vacate the throne,people are coming) which he wrote when India became republic on 26th January 1950. What he wrote at that time inspire us even today. Tomorrow when I will recite it in Ramlila Maidan,I am sure all those suffering from atrocities of Indira will get inspiration from this poem. We will write a new chapter in the history of this great country tomorrow. We will fight for Total Revolution. I don't know what will be it's result on her but I am confident that the change will come.

( An imaginative page of J.P. Narayan's (who lead peaceful Total Revolution against Indira Gandhi during Emergency) diary to get an idea what was going in his mind at that time.)

There are many examples in the history of world where one write to inspire millions to network themselves against a system or tradition,this is one such glimpse from the perspective of a great political leader of his time. This is also notable that most of the famous leaders of today like Lalu Prasad Yadav, Nitish Kumar,Mulayam Singh Yadav,etc emerged from this movement.