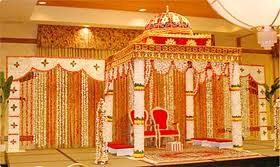 We in India are fortunate enough to have so many seasons to see due to our position in the world map. Summer,winter,monsoon,spring,etc. You name it and we have it but there is one more season of which we experience many forms and that season is wedding season.

In India wedding is like a destination for each individual to reach at a particular age,one started dreaming about his or her wedding since childhood,beautiful dresses,lavish arrangements,most suitable partner and so on. There are so much expectation in marriages that one spend huge amount of money in food,clothing and other arrangements.Due to huge differences in economic conditions we have so many type of marriage arrangements which one can afford according to budget.

Street marriages where tents were put in streets,food is limited and many times get finished before eating by everybody present there, parks or community center marriages,here marriages started getting bigger with more food items and for all ,bigger arrangements,bride and grooms costumes were better and so on,some may have music arrangements,DJ's ,orchestra according to the budget than we have farm house weddings which are based on themes having proper rehearsals for different ceremonies,dishes of different regions,designer outfits,etc. Last but not the least are palace weddings in old royal palaces which are used now as hotels and resorts where filmstars performs,food is in abundance,high profile people were invited,preparations began before months,dances choreographed,costumes precisely made,etc

Lots of money is wasted in wedding arrangements,food goes in drains in a country where so many people sleep hungry,electricity is overused,a small ceremony can also tie the threads of relation but performed otherwise,those who don't have that much money borrow from others out of  social pressure,dowry is given in the name of gifts,poor people often think there daughters as burden only because of this reason.

There are so many negative expects of such Big Fat Indian Wedding but there is also an other side of it. It provide work and business to thousands and lacks of people directly or indirectly,people plan there business according to marriage season,tailors,carpenters,masons,vegetable vendors,cloth manufacturers,marriage bureaus,painters,electrician,farmers,etc all takes there share from weddings, a good wedding season is a good business season more the demand more is the supply and more will be the profit. So enjoy this season every year.
Article community center filmstars Fresh Views marriages money palace wedding Social Issues work for all