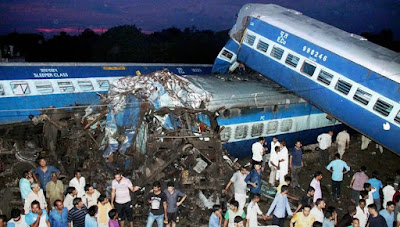 More than 20 people were killed and 70 were injured as 14 of the 23 coaches of the Puri-Haridwar Kalinga Utkal Express derailed in Khatauli near Muzaffarnagar on Saturday 19th August 2017. While it sounds silly that only 23 people have died in the accident according to railways when coaches were laying over one another the reason saddened me more. Train was allowed on under-construction track even when officials have notification for the same.

This is 27th fatal accident of the year and in a country where Lal Bahadur Shastri once resigned on a single accident as a Railway Minister his successors are not affected by anything. Ticket prices are increasing every year on pretext of security arrangements yet passengers are falling trap to that danger again and again. Who to blame when the system needs a repair and people are still worshiping leaders without showing concern to any national problem. The amount we are spending on building single Bullet Train track is enough to revamp the current railway system than why government didn’t take Japan’s help in this revamp rather in bullet train construction.

Faults on tracks are measured manually by some people designated for the job while many world nations are using machines and equipment for the work. Didn’t we need them also? I am sure more than 200 people have died in the derailment because two coaches are badly damaged but railway or the government has usual way to decrease the number of deceased to pay lower compensation. When even a single death should be considered a slur on any nation such multiple deaths are not enough to wake us. Tragically what is important to us today is Triple Talaq, Article 370, VandeMataram, Beef Ban, Ram Mandir and other drifting & similar dividing issues.

Always has hope and is determined for a better India I am closing this post with expectation to write something hopeful. God Bless India.