Amid increase crime report in UP where after swearing in of Yogi Adityanath as chief minister cases of murders, kidnapping, dacoities, rape, etc has increased many folds the fresh news came of the negligence in government hospital. At least 60 children have died over five days at the state-run Baba Raghav Das Medical College hospital in Gorakhpur.  The deaths are being blamed on infections and possible disruption of oxygen supply in the pediatric ward. 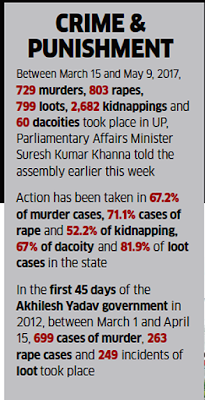 The administration has rejected the claims of shortage of Oxygen as reason for deaths but the increase supply of Oxygen cylinders in the morning after the news broke out indicating otherwise. Isn’t it the negligence of the government hospital administration, health minister and Chief minister? Incidentally Gorakhpur was Yogi Adityanath’s Lok Sabha constituency. No compensation can fill the void of death of innocent children but there must be a time bound probe of the reasons behind the death and culprits must be punished honestly. Responsibility of the health minister and his department must also be fixed in the case to avoid such negligence in the future. For me this should be considered as culpable homicide.

Yogi’s government instead of giving time to governance and development is busy in promoting Hindutva. While I have no problem with Hindutva agenda but it should not be done at the cost of innocent lives and dragging the state behind from its current position. Recently unnecessary forcing Madarsas to prove their patriotism by making video of their Independence Day celebration is drifting away from development issues since most Madarsas from the time of independence already hoist national flag in their premises. Making Vande Mataram compulsory in government schools which is a controversial issue also is a deviation in governance goal unless this is their only goal. Communal clashes have increased in the part of UP besides other crimes which should not be done if they believe in Sabka Saath Sabka Vikas.

Death of even one innocent is loss to the nation and here 60 children who have yet to see this beautiful world died due to inefficiency of few. Chief Minister should look into the matter himself for faster action. This incident spoils Independence Day celebration due in few days. Till next post God Bless India.
Baba Raghav Das Medical College current affairs Gorakhpur madarsa shortage of Oxygen Vande Mataram Yogi Adityanath