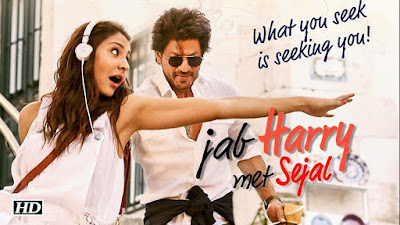 I don’t often write movie reviews even though I almost every week watch a Hindi movie. But after reading many reviews about this film and then watching it forced me to write this because film is completely different from reviews. I think these reviewers watch lot of Hollywood movies to judge Hindi films whereas to review them you need an Indian mindset and sensibilities. I agree that Imtiaz Ali has done better film earlier. Till date Jab We Met staring Shahid Kapoor & Kareena Kapoor is still my favorite but this film also explore one more aspect of his direction. Movie released on 4th August 2017.

Marketing: You can’t have better marketing strategy than Shah Rukh Khan and in this film too his hard work in promotion is visible. The team (Including Imtiaz Ali & Anushka Sharma) visited many cities and TV shows for film’s promotion. Music along with the way singles are released also helped in promotion.

Music:  Pritam Chakravarty’s music again topping the charts. After different style of Music in Ranbeer Kapoor’s Jagga Jasoos JHMS’s music was superb and apt for the situation. Irshad Kamil’s lyrics are meaningful and songs look good in the movie also.

Story: Harry (SRK) is a tour guide in Europe. The film starts with him showing different places to a group of tourists. Sejal (Anushka Sharma) is one of them. When tour ends all left for India except Sejal who insists Harry to accompany her in finding her engagement ring which she has lost somewhere during the tour. She then again visits all the places with Harry to find her ring and in the journey as happened in Imtiaz’s film they discover their different sides and develop love for each other. What happened to the ring? Will she return back to India for her marriage? Will Harry know that he started loving Sejal? What they both are seeking? Answers to these questions will lead you to the climax.

Review: Anushka perfectly portrays a Gujarati girl and they both are excellent in their job. SRK’s star power not overpowers any scene but enhances it. Have some elements which surely remind you of some earlier movies of Imtiaz Ali. Cinematography and screenplay let you room Europe by sitting on your seat. If their back stories were highlighted more that we have better connections with the characters.

Video of one of the song 'Safar'.