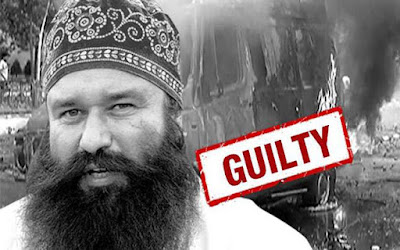 A special CBI court on Monday (28th August 2017) sentenced Dera Sacha Sauda chief Gurmeet Ram Rahim Singh to 20 years of rigorous imprisonment for raping two of his female disciples. Apart from sentence Court has also imposed fine of Rs 15 lakh on both the cases Rs 14 lakh of which will be given to the victims. This is the landmark judgement for the way court showed strictness against the accused and the government which failed in controlling the violence on the day he was convicted which killed around 40 people.

On 25th August 2017, Haryana government let Gurmeet Ram Rahim's armed followers gathered in Panchkula & Sirasa area of Haryana despite Section 144 was imposed in the area which prohibits gatherings of four and more people at any place. Manohar Lal Khattar who is ardent follower of Baba and bowed against him with his cabinet after his swearing in showed lethargy in handling the situation resulted in problems to locals along with innocent killings. The court strictly criticized this role of chief minister and even prime minister by reminding them that they represent Haryana and India respectively and not a political party BJP.

It took 15 years to this judgement and we must stand in regard to all those who stood strong against the mighty and powerful. Both the sisters who were victim in the case, the journalist Ramchandra Chatrapati who published their letter (in 2002) to then Prime Minister Atal Bihari Vajpayee about rape by Gurmeet Ram Rahim which triggered CBI probe in the case, (he was later shot dead), CBI DIG Mulinja Narayanan who didn't close the case even after threats & political pressure, prosecution lawyers and lastly CBI judge Jagdeep Singh who followed the law & constitution than faith of Gurmeet's followers. We are indebted to them for keeping our faith alive in the system. Hope he also got convicted in murder case of Ramchandra Chatrapati.

I wonder why people are so senseless to trap in worshiping of these Black Sheep Babas who instead of showing path to god become God themselves. Gurmeet Singh Ram Rahim is a rock-star god-man and still people have faith in him. Political association leads to growth of this kind of fake god-man and the fate of people like Nityanand, Asaram, Rampal and Ram Rahim shows they all are not for faith but money. It should also be noted that no political party head or prominent leader welcomed the court's decision. The people like Sakshi Maharaj who is MP of ruling BJP spoke in support of Ram Rahim than of those two girls. We must be vigilant to stop the growth of such conman by checking their allegiance to a political party.