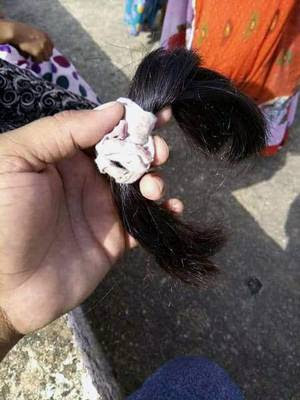 Mysterious braid (choti) cutting incidents has happened in Rajasthan, Haryana and Delhi where women mostly around 50 years of age has their braids cut without their knowledge by some invisible source causing fear among women in these areas. Women also fell unconscious during the time of braid cutting which left them clueless about the attacker and made the incident mysterious. Police who have recorded the statements of victims deny any black magic involved in this which is rumored in the video circulated in social media groups. They are asserting that some miscreants are behind the incident.

The video allegedly claims that a woman is on a mission to cut 1008 women braids in order to get invisibility power according to a black magic ritual. I heard this news around a month ago from someone whose relatives live in Rajasthan. The incident was not in news at that time, I denied him saying that these are rumors or acts of miscreants and I still believe miscreants and anti-social elements has role in all this. Sad part of the story is that a 65 year woman who went outside to relive herself at night in a village near Agra was killed by people believing her to be a witch responsible for cutting braids.

We may know the truth in some time or the rumors die out a natural death but for the time being we need to remain calm and restrict ourselves in spreading any kind of rumors. This is second time in my life that I am witnessing such situation when such rumor mongering reached to national news debates. First time it happened in 2001 when rumors of monkey man created fear in people of Delhi. Then it was also proved to be a hoax and who knows something secretive has done by someone during the rumor period and the news was only to divert police & people somewhere else.

In this braid cutting news also there are more rumors than truth. One or two isolated incidents are hyped so much to create fear among women. People I have heard that started applying turmeric hand prints on their doors to keep away evil. Lemon-Chilli (Nimbu-Mirchi) was also hanged for the same purpose by some at their doors. Superstition in our country just need a chance to fly high and the incident has gave that chance. Hope the fake news ends soon because we already have many around to divert our attentions. Good bye. God Bless India.

Video of a related News Item in Hindi