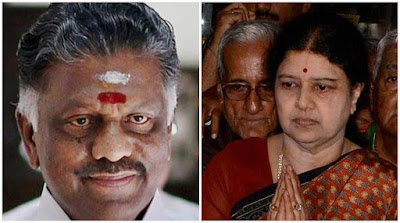 As expected split in the ruling AIADMK in Tamil Nadu is widely visible after the death of J.Jayalalithaa who was the undisputed leader of the masses and also in the party. But as happened in the case of regional parties where there is only a single mass appealing leader leading the political party split was unavoidable as every leader try to taste the slice of power voided by that leader's absence. In this case Sasikala popularly known as Chinamma (Mother's sister) and O. Paneerselvam who was Chief Minister of Tamil Nadu in various occasions in absence of Jayalalithaa are fighting over her legacy in the party and the government.

O. Paneerselvam was leading the government as Chief Minister of Tamil Nadu and Sasikala was leading the AIADMK but it was decided by party legislature that there should be only one power center for which they elected Sasikala as chief minister of the state. Paneerselvam who resigned from the CM post after this decision later claimed that he was pressurized to do so by people of Sasikala group and he will remain the CM unless decided differently by the governor which triggered the plot of this political thriller in the state. Some believed DMK the largest opposition party of TN was behind this controversy while many others believed that central government is trying to destabilize the state government to impose President's rule as it did in the state of Arunanchal Pradesh and Uttarakhand. Now its up to the governor to check the claims of both the leaders of support of MLAs and then give a nod to any one of them to prove majority in the assembly and form the government. Governor's delay in judgement and sending reports to center government for further decision also raising doubts of some conspiracy. Coming of Jayalalithaa's niece Deepa in this drama to target Sasikala also adding to the drama of this thriller.

I have said earlier that it happens in regional parties when the popular leader died or resigned from the active politics that people inside the party fought for the claim of his/her legacy. When Bal Thackerey leaved the active politics and made his son the president of the Shiv Sena in Maharashtra his nephew Raj Thackerey split from the party to form another party Maharashtra Navnirman Sena which claimed to be the true bearer of Bal Thackerey's ideals. Somewhat similar kind of power tussle also witnessed between Akhilesh Yadav and Shivpal Yadav in Samajwadi Party ,UP to claim Mulayam's heritage. Congress, BJP, AAP and many other parties saw such splits in the name of serving the people arguing that party has deviated from its original path.

Like in Tamil Nadu every party or state witnessed such political thriller's in name of public will while actually it is for power control. I only hope whatever happen in Tamil Nadu has betterment of people store in it. Till next post. God Bless Tamil Nadu.
AIADMK Chinamma Deepa DMK governor J.Jayalalithaa News O.Paneerselvam political thriller regional parties Sasikala Tamil Nadu