The ABC Murders is written by Agatha Christie and is published by Harper Collins India. This is my fifth Agatha Christie novel. I have bought this one from the Amazon.in. Its a serial killer mystery and from one of the cases of detective Hercule Poirot. 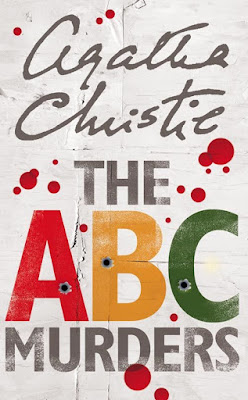 Cover and Plot: The cover is simple giving hint of murders with marks of gun shots on alphabets ABC and blood spots on the cover page.
Hercule Poirot received a printed letter challenging him to stop the murder at Andover on 21st of that month. Poirot informed the police but didn't take this letter seriously thinking it as a hoax. But murder did happen in Andover of Mrs Ascher. Police arrested her husband for the murder but Poirot believed it was done by someone else someone who has send him the letter. His doubt confirmed when he received another letter warning him of killing at Bexhill on sea on 25th. In spite police arrangements a girl named Betty Barnand was strangulated at the beach. Poirot and police again failed to track the murderer and then the third letter came and third murder happened of Carmichael Clarke in Cruston. Poirot observed that killer is killing alphabetically and leaving ABC railway guide at the murder scene but not any connection among his victims.
Hastings suggested to call those associated with the victims to form a group to discuss these murders to point out any similarities or clue which they have missed earlier. Police on the other hand found another murder at Doncaster but here the ABC sequence broke as the one who killed has name different from alphabet D. Someone also spotted the murderer which gave police clue about his identity. Will he was caught at this time? Was he the murderer? Did Hercule Poirot has something else in mind? The great detective deduction reveals a thrilling climax.

Review: The narrative was not as impressive as I have found in other Agatha Christie thrillers. I felt the pace reduced at many points. But the story was interesting and gripping. All murders were unconnected which made it difficult to guess the motive of the murderer which keep you hooked till the end. Suddenly a dull thriller came alive during the climax when Poirot revealed his deductions which startled everyone.