Jolly LLB 2 is the sequel to the 2013 film Jolly LLB starring Arshad Warsi also directed by Subhash Kapoor who has directed this film also. It stars Akshay Kumar in the lead role of Jolly supported by Huma Qureshi, Annu Kapoor and Saurabh Shukla in crucial roles. This is a satire on Indian Judicial system which highlights how the wickedness of lawyers in manipulating the evidences and the witnesses which denied justice to many people. The film is on a larger scale than the first one with Akshay Kumar in it. 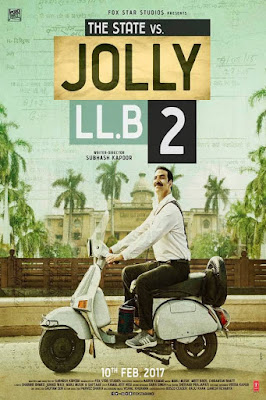 Music: Music to me is not much effective neither have it helped in film's promotions. 'Go Pagal' is a fun song which is difficult to hear in loops similar is the case with 'Jolly Good Fellow'. The Qawwali 'O Re Rangreza' and romantic song 'Bawara Mann' are melodious but they too are not catchy enough to hold with the listeners.

Marketing: Akshay Kumar like Shahrukh Khan is a star good in marketing his movies. He never misses shows and events to create the buzz about his films. Viewers are waiting for the movie since he first announced it on Twitter.

Plot: Jagdishwar Mishra aka Jolly (Akshay Kumar) is an struggling lawyer working under a reputed senior lawyer of Lucknow. He lives with his wife Pushpa Pandey (Huma Qureshi) and a son. He has intention to get his own chamber for private practice. One day he took money from a client rejected by his boss to buy lawyer chamber by bluffing her that his case was taken by the senior lawyer. When this client who was fighting for the justice of fake encounter of her husband knew about his cheating exposed him in front of his friends and family. She committed suicide after losing all hopes of getting justice. This shattered Jolly whose father disowned him after that incident. He pledged to fight for the justice and file a PIL against the police officer for fake encounter. The film ends with the courtroom battle between Jolly and famous Lucknow lawyer Sachin Kantilal Mathur (Annu Kapoor) with an historic decision by Justice Sunderlal Tripathi (Saurabh Shukla).

Review: Screenplay by Subhash Kapoor and dialogues creates moment in the film which ignites your emotions of laughter, anger and sympathy in a way that not let you leave even the single scene of the movie. Akshay Kumar performed well in his role supported by Huma Qureshi. Saurabh Shukla walked one step higher in his role as Justice Tripathi. Annu Kapoor as a cunning lawyer gives justice to his role. Unnecessary scene of Justice Tripathi's daughter's wedding looked inappropriate to me. Climax is also stretched to create more drama. Overall after a long time a film has come in which story and screenplay weighs more than the star power.

Verdict: This film is a family entertainer you must watch this weekend or any day you have time.