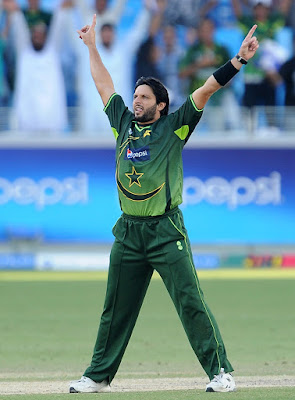 Shahid Afridi the evergreen cricketer of Pakistan also retired from the international Cricket. The last cricketer of the 90's generation when I used to watch cricket (now I only watch few Indian matches and IPL) and I think he was the man who changed the dimensions of the cricket. Sanath Jayasuriya was the first man who started utilizing the 15 over Power-play and he also become the perfect exploiter of these overs. However I have not watched him playing many long innings except the one when he scored 37 balls century fastest at that time on his first match. Otherwise he has scored few runs but mostly with boundaries.

He was famous in India too and garnered appreciation for his play and looks when Pakistan team toured India. He was more of a bowler than a batsman. His batting innings were usually short and he got out quickly after scoring few quick runs but as a right arm leg spinner he appeared as a match winner for his team in many occasions. He started pinch hitting which was followed by many cricketers after him. The chants of Boom Boom Afridi were always heard when he was on the pitch not only from his country's supporters but also from the opponent country fans. He always made the match entertaining through ball or with bat.

Now when he retired from the international Cricket at the age of 36 he still remembered for the youngest cricket debut (16 years). He holds many world records and records for his country like :

With him heroes of the 90's cricket fans have all retired. I will remember him as the cricketer on the field who always brings energy to the game. I wish him good luck in his future endeavors.
all rounder Boom Boom Afridi cricket cricketer current affairs Pakistan pinch hitter retirement Shahid Afridi Tribute